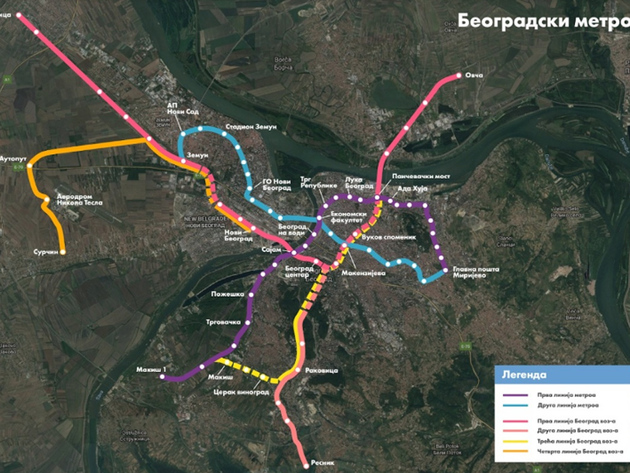 (Photo: Beoinfo)
The subway concept entails two lines, the construction of which should start, and four BG Voz lines, which, combined, will make up the high-capacity independent rail system, Assistant Mayor of Belgrade Andreja Mladenovic said, as reported by Beoinfo.

– According to the study being prepared by France’s Egis, we will get all the routes, the first of which should run from Makisko Polje to Mirijevo, whereas the second one runs from the Zemun Railway Station to Ustanicka Street in Vozdovac. The two lines will cross at the Sava Square. The works in Makisko Polje are expected to start in 2020. We are doing this job together with the republic, as this is not just a Belgrade project, but also a large development project. We will learn how the project will be financed and who will build it this year, and it’s important to emphasize that the subway system cannot function without BG Voz, which will complement it with its four lines to cover almost the entire city – Mladenovic said on TV Studio B and emphasized that the subway was a development project which also raised the price of building land.

Talking about the new concept of the Sava Square, Mladenovic said that it would be a connection between the old part of the city and the new one – Belgrade Waterfront.

– The Sava Square will be returned to pedestrians, but it will also be well connected with traffic routes, and it will also feature the monument to Stefan Nemanja. Our delegation has visited Moscow to see how far the preparation of the monument has progressed. We expect the development of the square to be completed in the early autumn – Mladenovic said.

He said that the new concept will feature more green areas. Mladenovic also reminded that the paving of the Republic Square had started and that around 200 m2 of granite slabs had already been laid down.

– The Republic Square is a 1.5-ha area. It will have a more modern character, with 150 physical barriers removed, 350 m2 of green areas set up and new lighting. We expect the paving to be done by April and to then start working on traffic routes. Instead of asphalt, we will have cobblestones and room for new tram tracks, for the tram route from Slavija to Kalemegdan. By turning Vasina Street into a pedestrian zone, we will give the center of the city a new look – Andreja Mladenovic emphasized.