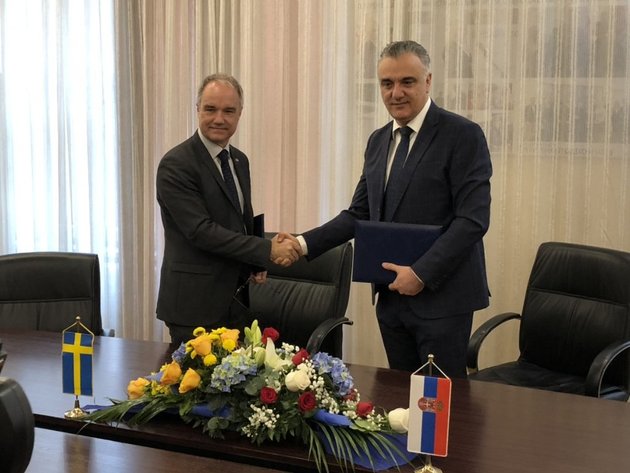 Jan Lundin and Borko Draskovic
The Swedish Ambassador to Serbia, Jan Lundin, has signed agreements on the financing of four projects in Serbia worth a total of EUR 7 million.

On Wednesday, February 6, 2019, Ambassador Lundin signed an agreement with the director of the Republic Geodetic Authority, Borko Draskovic, whereby Sweden supports Serbia in establishing the National Register of Investment Maps. The aim is to make locations and potentials in Serbia easily available to investors through digitalization.

– I believe that this will be good for the development of Serbian economy. Investors will be able to find locations more quickly and easily and have an insight into the potentials for investments. This is a good example of the partnership cooperation of Swedish and Serbian institutions – Ambassador Lundin said and added that the digitalization would also reduce the possibility of corruption thanks to transparency and an easy insight.

The improvement of the business climate is a two-year project worth EUR 2 million.

On Tuesday, Ambassador Lundin also signed three agreements on support with the Serbian Minister of Internal Affairs, Nebojsa Stefanovic, worth a total of EUR 5 million. This is the Swedish donation to the Serbian police for the development of the capacities for EU integration, the reduction of risk in extraordinary situations and the continuation of the cooperation between Serbian and Swedish police forces.

– The police forces in both countries should learn from each other. I will be glad if we can share what we know and help Serbia on its way to the EU. Sweden can learn a lot from Serbia about floods, which you have experienced. It’s important to share experiences. Over the years, our partnership has resulted in the fact that the two police organizations cooperate daily on solving the most serious criminal offenses – Ambassador Lundin said.

Through the projects meant for police forces in Serbia, Sweden is also helping in the development of the Ministry of Internal Affairs as a modern, democratic and efficient police force, which guarantees safety and functions as the citizens’ service.

The Swedish government is one of the biggest individual donors to Serbia. The total value of the planned support of Sweden to Serbia for 2019 was EUR 11.7 million. In addition to the already mentioned projects, financing will also be provided for projects in environmental protection, civil society development and freedom of media.