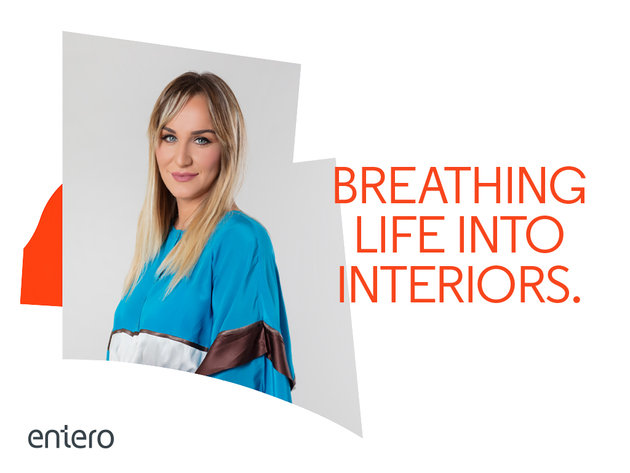 Marina Kovacevic Raicevic
The Nova Pazova-based company Entero has been operating in the Serbian market since 1975. Since then, it has become one of the leading companies in Serbia in the field of furniture production and equipping of interiors.

The company's success has been recognized in the country, as well as abroad, as shown by the fact that Obrad Kovacevic, the director and founder of Enter, was one of the 33 candidates for the prestigious EY Entrepreneur of the Year 2017 Award.

– The story of the development of Entero begins at the carpentry shop of Obrad Kovacevic over four decades ago. With a well designed strategy, investments in human resources and production capacities, our company is becoming synonymous with quality, as confirmed by numerous projects in the local and the foreign markets. In line with investors' wishes, we create sophisticated interiors, and the quality and the design have long since been recognized in the local market, but also abroad, where we primarily sell our products nowadays – Marina Kovacevic Raicevic, General Director of Entero, says in her interview with eKapija.

Today, the company takes up 5,000 m2 of office and production space and employs 120 people of various profiles.

– All of us at the company believe that it is important to lean on quality human resources, which is why we insist on constant investments in the education of our employees, as this is a very important advantage of ours. Of course, we also constantly invest in production capacities. Our quality has long since been recognized in the local market. We have been present in the market of former Soviet states for two decades, and our products are also increasingly present in Western European states – our interviewee says.

As she points out, Entero's advantage is in its long tradition and the fact that they've managed to become a large exporter from Serbia, exporting Serbian products continuously for close to three decades.

– We always try to meet the needs of even the most demanding clients. While the production requires attention to detail, we place focus on fine finishing, which makes the difference between the good and the best. We have an opportunity to create sophisticated interiors, which have long since become a recognized brand in Serbia and outside it. The management has decided to increase the company's production capacities and thereby meet the needs of even the most demanding clients. Our advantage is that we've managed to not only follow the constant changes in this business, but to also set their pace – says Marina Kovacevic Raicevic.

Another special feature of Entero is that they don't produce serially. Instead, they manufacture furniture for known clients per project, which is different every time.

– We are very flexible and we try to honor the investor's special requests. We are ready to make changes to a project in progress in order to achieve our common goal within the deadline. We try to cooperate with partners and investors in the country and abroad as well as possible – eKapija's interviewee says.

In the past 25 years, the company has been active in nearly all former Soviet states, and in the past three years, the focus has been on Eurasian states Tajikistan and Kazakhstan.

– As for the neighboring countries, in Croatia, for example, we have recently equipped hotels in Opatija and Sibenik. Montenegro is a market we've been present in for three decades now. In the past three to four years, we've equipped the most luxurious facilities in Montenegro, such as the Regent apartments and hotel in Porto Montenegro, as well as The Chedi hotel on the Lustica peninsula. We have also completed the equipping of Maestral Resort & Casino in Przno, but also hotels Iberostar Perast 5 and Iberostar Herceg Novi 4. We have equipped facilities in Austria, Switzerland... The latest facility we've equipped is the exclusive Gorski Hotel & Spa on Kopaonik.

The list of projects doesn't end there. As they say, they've equipped facilities such as the University of Central Asia, the UCA Campus in Khorugh, Tajikistan, the hotel complex Dagomis and the RUS sanatorium in Sochi, a Russian cultural center in Bethlehem, a residential villa in Montreux, Switzerland, the Meisho Hills residential complex in Marbella and a hotel in Salzburg, Austria.

– Some of the facilities we've equipped in Serbia are hotels Marriott and Admiral in Belgrade, Hotel park in Novi Sad, Hotel Izvor in Arandjelovac and Hotel Tornik on Zlatibor. This is only a small part of our portfolio. Given Entero's four-decade-long tradition, I am proud to say that the list of facilities we've equipped is by far the most respectable in Serbia and the region – Kovacevic Raicevic says for our portal.

According to her, the Entero's target group are investors in luxury facilities. It should also be noted that Entero is 95% export-oriented.

– We have specialized in equipping luxury interiors within short deadlines. We have therefore focused on big, complex projects, with special material and design requests. However, there are not that many such projects in the local market, so we are more oriented to foreign markets, where we are recognized for the high quality of our products and services – eKapija's interviewee says.