Industrial park to be raised in Smederevo 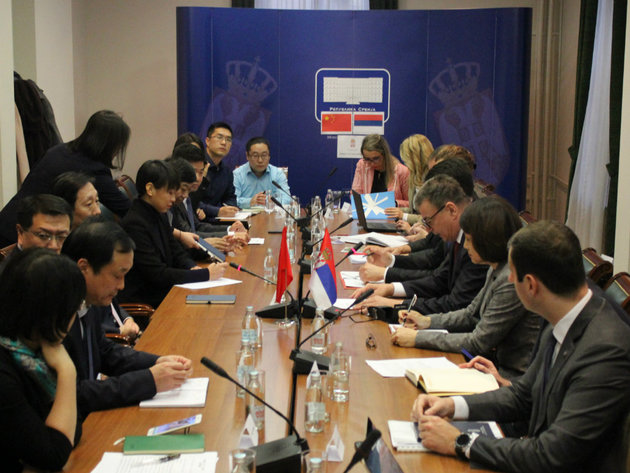 From the meeting
Serbian Minister of Economy Goran Knezevic met with the president of China's HBIS Group, Yu Yong, on Tuesday, January 22, to discuss Chinese investments in Serbia, with a special focus on the project of the construction of the Chinese-Serbian Industrial Park of Friendship in Smederevo.

As the Ministry of Economy says in its press release, Knezevic said that there was a long tradition of friendship between the two countries and that China was the most important economic partner of Serbia in Asia.

He reminded that the current year marked the third anniversary of the signing of the sales and purchase agreement on Zelezara Smederevo between the Government of Serbia and Hesteel Serbia Iron & Steel.

– This investment in one of the most important industry sectors raised the strategic partnership of Serbia and China to another level – the minister said.

According to him, the construction of the industrial park in Smederevo is a prelude to a new strategic partnership.

The president of China's HBIS group, Yu Yong, said that the company supported the project of the construction of this park.

– HBIS Group will continuously support and accelerate the construction of the Chinese-Serbian Industrial Park of Friendship in Smederevo. Since the two sides have cooperated so successfully so far, I believe in the project of construction of the industrial park. This will not only bring economic benefits, but also improve the local economic infrastructure – he said.
Companies:
Ministarstvo privrede Republike Srbije
HBIS GROUP Iron & Steel d.o.o. Beograd
Železara Smederevo d.o.o.
Tags:
Ministry of Economy
Goran Knezevic
HBIS Group
Yu Yong
Chinese investments in Serbia
Chinese Serbian Industrial Park of Friendship in Smederevo
industrial park in Smederevo
Zelezara Smederevo
Hesteel Serbia Iron and Steel
Share: