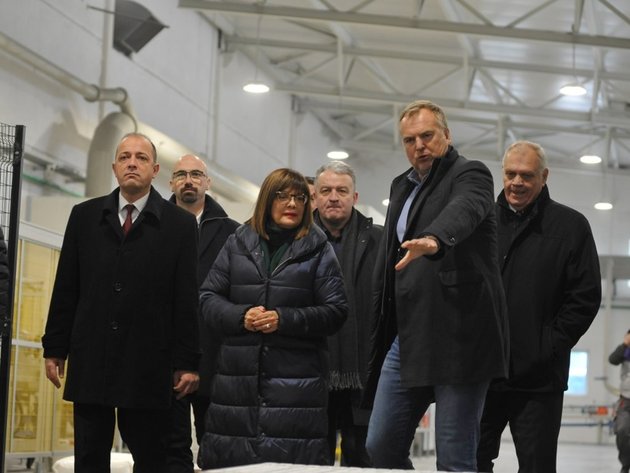 From Maja Gojkovic's visit to Zorka Keramika
The owners of the Sabac-based ceramic tile plant Zorka Keramika have announced investments of EUR 15 million in the increase of production capacities and the employment of new workers. This company is one of the largest producers of ceramic tiles in Serbia, with an annual production of 4.2 million square meters.

This Monday, December 17, the factory was visited by the president of the National Assembly of Serbia, Maja Gojkovic, who pointed out that Zorka Keramika was a good example of a modern company keeping up with the trends and being ready to implement new technologies and added that the company was very important for Serbia, having found markets outside the country, and not just in the region either, but also in the very demanding and competitive EU markets.

– Zorka Keramika is the largest ceramic tile plant in Serbia and the only plant in the country with the technology of tile rectification. We also produce “gres porcellanato”, which entails a special way of ceramic tile processing and production. In the past two years, we have been producing the Tilezza premium brand, featuring modern design and format, for which there is a great demand in the market, especially for residential projects in Serbia, but also for the export. That's why the decision was made to build new production capacities. The investment of EUR 15 million will enable an increase of the production by 3 million sqm, but also the creation of 100 jobs – said Markus Bogdanovic, one of the owners of Zorka Keramika.

In 2004, an Austrian consortium bought Zorka Keramika and the Koceljeva-based factory of brick products Zorka-Opeka as part of the privatization of the industrial complex Zorka Sabac. The ceramic tile plant currently employs 300 people, whereas the brick factory employs 60.

As much as 50% of what's produced is exported, primarily to Hungary, Slovakia, Croatia, Macedonia, Bosnia and Herzegovina, Montenegro and Italy.