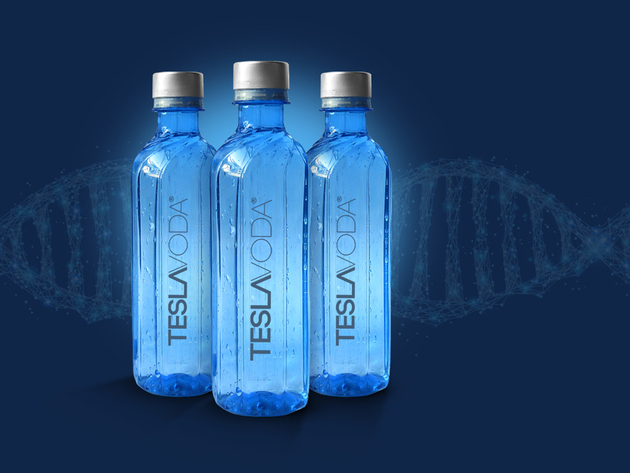 Tesla Voda is the first and only highly progressive alkaline drinking water in Serbia. An unusual and innovative product, which “electrifies” you when you drink it, it is categorized as non-carbonated natural mineral bicarbonate water.

What makes this water unique is a special technology of ionization, developed over several years by a team of experts at Valjevo-based Neutrino Power, relying on the available findings and works of Nikola Tesla. The spring is located in the heart of Serbia and has been in use since early 18th century.

The unique electrified taste is the result of a specific ratio of minerals and ions, and the main characteristic of Tesla Voda is its progressive alkalinity, which sets it apart from other alkaline waters in the world.

As the company explains, progressive alkalinity means that bodily fluids become alkaline themselves in contact with Tesla Voda, that is, their pH value grows to over 7.5.

Neutrino Power says that Tesla Voda is only one of the patents of the group of Serbian scientists dedicated to studying and developing the fundamental science set by Nikola Tesla. Aside from being meant for everyone who consciously supports the development of science and aiding talented young people, Tesla Voda, they say, is also a good way to take care of one's own organism and health.

– Tesla Voda is a unique product, not only in the Serbian market, but in the global one as well. Our brand is protected in 74 countries as intellectual property and, as far as we know, is the most protected Serbian brand. The goal and the mission is to use the commercialization of Tesla Voda to finance progressive projects the implementation of which leads to an overall social progress, primarily through the works of young scientists, students and science institutions. With Nikola Tesla and his contribution to world science as our model, we are looking to continue the tradition of this prominent scientist – the company says.

As negotiations with distributors are in progress, the water can only be ordered online for now, but should soon be available in stores as well.

The production process of Tesla Voda is in the final phase of complete automation and, as they told eKapija, beginning with January 2019, the company will be able to deliver over a million bottles a month.

– Of course, that`s not nearly enough, considering the demand for Tesla Voda, which is why another production line should be commissioned by March, whereby we will double our production capacities. Currently, our most important production and distribution partner is Atlantic Group, which is one of the biggest business entities in the region.

At this year's fair in Shanghai, Neutrino Power presented its activities to potential Chinese partners, and they exported the first quantities of their product to China in late 2018.

As they say at the company, in addition to the commercial aspect, the chance to export to the huge Chinese market is also an excellent opportunity for cooperation with their Chinese friends in the field of science, in supporting young scientists and official institutions and in developing the thoughts and patents of Nikola Tesla.

– The Shanghai fair was an excellent opportunity for Tesla Voda to be presented to the enormous Chinese market. The interest is huge. Tesla Voda gets daily offers for cooperation not just from China, but from the entire world. As for China, we need to be careful not to get carried away with the potential success the Chinese market offers. It's hard to find truly responsible partners in China who have both the strength and the wisdom to handle this unique product.

Neutrino Power's product is currently available in 15 markets, including Serbia, and the European and the western market are currently the most important markets for the company.

– We are exporting to China and the EU and we are currently entering one of the largest store chains in Russia. By the end of the year, we expect to realize the first exports to Switzerland.

In the United States, we are in the final phase of being registered at the USFDA, following which we will start realizing the export in cooperation with known partners.

In Germany, we are negotiating with the biggest producer of drinking water about obtaining the license and initiating the production in that country, as the second phase of our penetration of the European market – Neutrino Power reveals for eKapija.