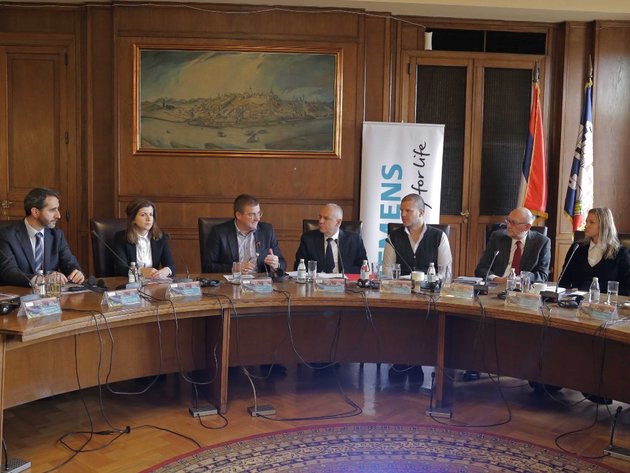 From the presentation of the CyPT study
It is estimated that the number of residents of Belgrade will increase by 250,000 in the next 15 years, and these changes will increase the need for the further upgrade of the infrastructure, along with the necessary investments in the transport network, energy and building construction.

This should be aided by the City Performance Took (CyPT), a donation by Siemens to the City of Belgrade. CyPT has been developed to help cities identify technologies for the energy, construction and transport sectors that can contribute to the reduction of the emission of greenhouse effect gases, improve air quality and create new jobs in the local economy.

The presentation of the CyPT study at the Old Palace was attended by Dr Zoran Radojicic, Mayor of Belgrade, Udo Eichlinger, CEO of Siemens Belgrade, and Tiago Barreira, Director of City IT Applications at Siemens, as well as representatives of the capital of Serbia and the management of Siemens in Serbia.

– Belgrade is growing faster and faster and it is important for us to develop as a green and smart city. Our aim is for Belgrade to be a candidate for the green capital of Europe. In the upcoming decades, we are looking at big challenges, and an even greater population influx will have an impact on the needs of the city infrastructure. This is the reason for defining technologies which will help us reach these goals – Radojicic said.

Eichlinger reminded that the City of Belgrade and Siemens had signed an agreement on business-technical cooperation in February 2016, under which city experts were provided with an insight in the latest technologies in the field of infrastructure on a global level.

– The results of the implementation of CyPT can be of use to the city in forming a strategic environment plan and assessing the necessary technological intervention to the end of planning steps towards a considerable reduction of the emission of harmful matters. Belgrade will now be like Vienna, Copenhagen, San Francisco, Washington and other cities, one of the world capitals which use this tool as an integral part of planning an environmental agenda – Eichlinger stated.

Siemens has realized the modeling of the environmental and the economic impact of four different scenarios, with the primary focus on the sector of transport and the implementation of various means of transport. Private cars currently account for less than 30% of the annual passenger transport mileage, whereas public transport accounts for over 60%.