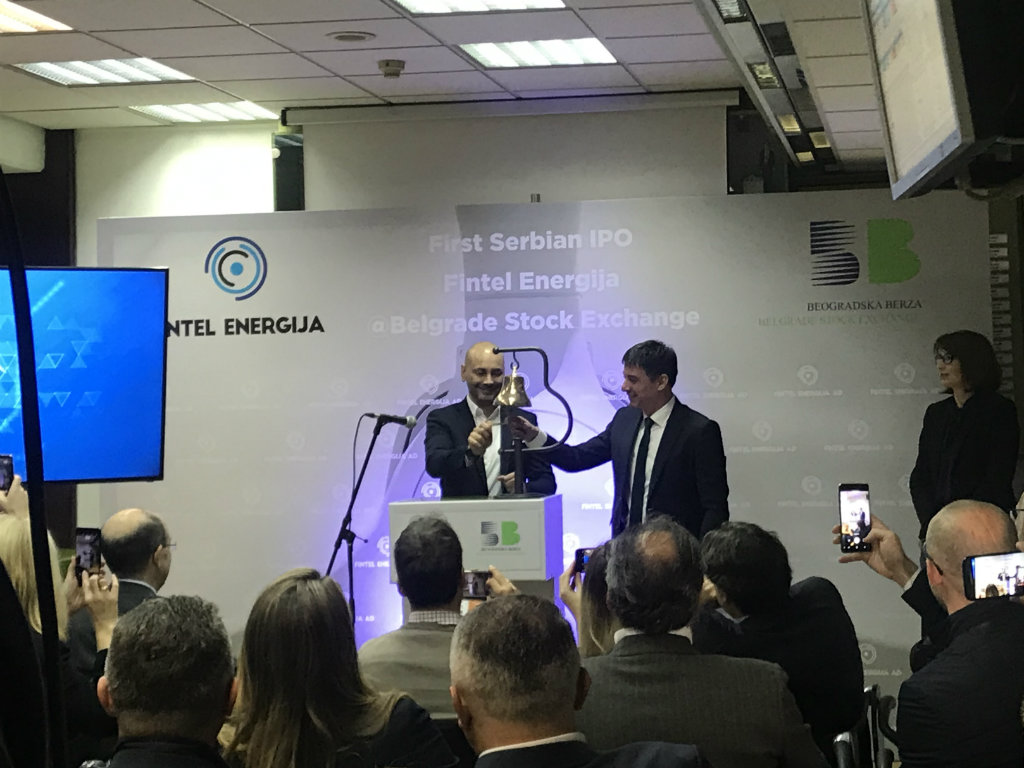 (Photo: Sanja Šojić)
After more than 80 years, the Belgrade Stock Exchange tolled its bell, marking the beginning of the trade with the shares of Fintel Energija a.d.

Saying that BES was founded in 1894, “two years before the Dow Jones index was established”, Krneta noted that it was one of the most relevant stock exchanges in this part of the world when it was founded.

– Our market, economy and society as a whole took 80 years to witness a new market birth. That is why this is a special day for us – Krneta said.

He added that BES had the ambition of once again becoming the place for all local companies which need capital to finance growth and development.

– We want to enable the owners of the best Serbian companies to acquire capital in a way that won't jeopardize their competitiveness – Krneta said.

The director of BES said that he expected the bell to by struck two more times in 2019.

Reminding that Fintel Energija is a pioneer in the industry of wind power in Serbia, Giovannetti said that the list of purchasers included insurance companies, pension funds and several hundred individuals and added that he expected institutional investors to express interest in the purchase.

– We can't predict who will buy the shares. We only know the price. From this moment on, we have no influence on the price and its trends. It's what it is, an we can only observe what happens, just like you – Giovannetti said.

Talking about the future plans of Fintel Energija, Giovannetti said that the Kosava project near Vrsac, one of the biggest wind farms in Serbia, worth around EUR 120 million, would be completed before mid-2019.

The process of Fintel Energija's IPO ended on October 30, and 1.5 million shares were subscribed during the process, which was the proscribed threshold. The company thereby collected RSD 755.2 million for the further operations and the expansion of the wind farm system in Serbia.