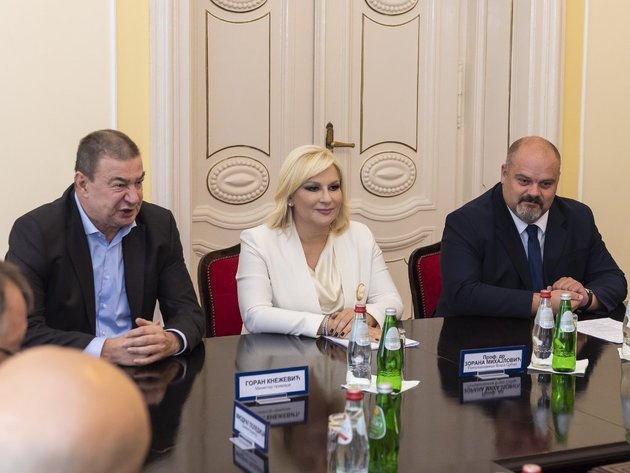 From the meeting
The works on the completion of the bypass route around Zrenjanin and the bridge on the Begej began on Thursday, October 25, 2018, and their total value amounts to RSD 350 million (plus VAT), the Ministry of Economy announced.

It is expected that 3.7 kilometers of the road will be completed by September 2019.

Economy Minister Goran Knezevic and Minister of Construction, Transport and Infrastructure Zorana Mihajlovic took a tour of the construction sites and the Begej Shipyard, which has restarted the production following the overhaul. At the moment, Begej is making six barges for the Dutch market.

Before the tour, the ministers talked to Mayor of Zrenjanin Cedomir Janjic about the construction of the high-speed Belgrade-Zrenjanin route, the completion of the Pancevo-Orlovat-Novi Sad railway, the Ecka airport and other projects.

Only logged-in users can comment.
Latest
Most read
Croatia to be Forced to Import Wheat 11.08.2020.
Russia Registers First Vaccine Against Covid-19 11.08.2020.
ABB to Modernize Veliki Krivelj Copper Mine 11.08.2020.
Most New Jobs in Canada Part-time – Small and Medium Companies Facing Shutdown 11.08.2020.
ABB to Modernize Veliki Krivelj Copper Mine 11.08.2020.
Zlatibor Accommodation Occupancy Rate at Over 95% 11.08.2020.
Best Offer in the Neighborhood – It's Never Been Easier to Get a Modern Apartment That Radiates Luxury and Sophistication 11.08.2020.
Construction of New Covid Hospital in Krusevac Starts – Works Worth RSD 1.72 Billion, Completion in December 10.08.2020.
Weather
Weather forecast