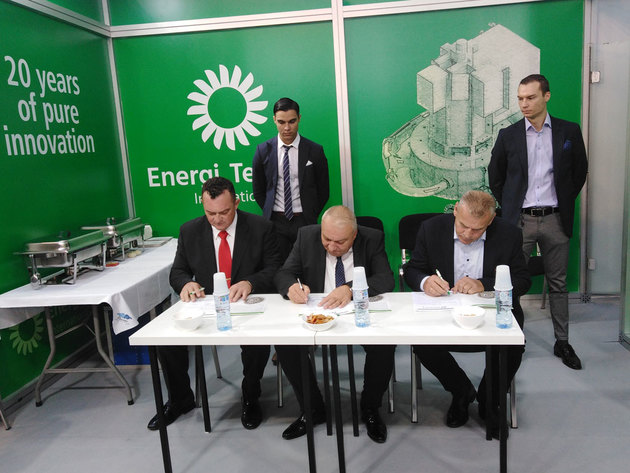 From the signing
Norwegian company Energi Teknikk signed an agreement on strategic partnership with D-company from Babusnica, Serbia, on Thursday, October 4, 2018, at the Energy Fair in Belgrade.

The Norwegian company, founded in 1998, delivers full electro-mechanical equipment for small and medium hydro power plants of up to 20 MW. They sell their equipment throughout Europe, and, according to General Manager Milan Barackov, they are especially focused on Serbia.

– To us, the most important thing was to establish good cooperation with local partners and producers from Serbia. In the past 5-6 years, we have managed to do a lot, especially in the metal industry, by hiring certain Serbian companies. To that end, we've also established cooperation with D-company from Babusnica, which is one of the most successful Serbian companies with 500 permanent employees – Barackov told eKapija.

The Pirot-based company, which produces molds for pneumatics, has adopted the Norwegian technology of the production of rotors and turbine chambers, he added.

As Barackov told our portal, this agreement confirms that the cooperation of the two companies so far and creates the possibility of having the full process of the production of electro-mechanical equipment for small and medium HPPs carried out in Serbia.

The plan is for Serbian participation in upcoming projects to increase.

– It can be said that this is a Norwegian-Serbian company. There's always talk about how there need to be investments in Serbia, and here investments are made in Norway. However, the effects are much greater, because this will allow us to sell Serbian products in the Balkans and everywhere in Europe and beyond and, certainly, use the expertise of people from Serbia, which has been confirmed – Barackov said.

As a confirmation of the successful operations in Serbia, Barackov exclusively announced that Energi Teknikk contracted the construction of 6 HPPs for EPS as part of a consortium with Belgrade-based Hidrotan.

– This is a great responsibility for us, but also an important reference – Barackov said.

Energi Teknikk was formed when entrepreneur Eivind Tvedt developed his own small power plant on the river on a family farm in Kvinnherad. After receiving great help in his local community for the development and the production of the turbine for the facility, he founded Energi Teknikk with his partners, Rune Hansen and Paul Hovda, with the aim to offer adapted facilities to the market of small power plants.

Today, they cooperate with several Serbian companies, among which is ATB Sever from Subotica.