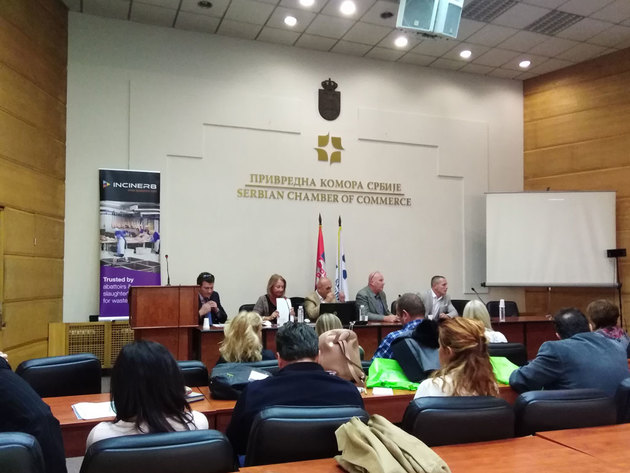 Waste management is one of the biggest problems in Serbia. For example, although the country needs at least 30 centers for animal waste treatment, it only has two for now. Furthermore, landfills which are overflowing due to not being treated, as well as an insufficient number of facilities for waste water treatment, are a problem, whereas the maintenance of those that have been built costs a lot due to their great size.

Solutions to these problems were the topics at the Waste Management Conference in Serbia, organized by Green Energy Save Group and ECO WASTE TREATMENT, as well as exclusive representatives of INCINER8 from Great Britain, with the support of the Chamber of Commerce of Serbia.

According to Dragan Jeremic of the Ministry of Environmental Protection, the problem arises due to the belief that waste treatment centers are themselves dangerous, which is why many local self-governments don't want to take part in such projects. As he says, a lot of money is spent just searching for a location and citizens need to be educated about this.

Sinisa Mitrovic of the Chamber of Commerce of Serbia said that the results since 2000, when Serbia started addressing the issue of environmental protection, have been abysmal.

– After 18% years, we are recycling only 5% of municipal waste, the waste water treatment amounts to 1.5%, we have EUR 6 billion in direct damage from climate change, 55% loss of drinking water in Serbia's water supply systems, 156 large municipal garbage dumps, 3,500 large illegal garbage dumps without centers for the physical and chemical treatment of dangerous waste. We've received over 2 billion from the EU to address this issue in the first period, and now we have many more obligations and much smaller funds and fewer participants, so we need to opt for a credit line, as this ecological transformation cannot take place without money – Mitrovic said.

One of the important factors for the construction of the necessary centers for waste treatment is putting funds where they are needed. The problem arises, Mitrovic says, because the funds are often put into one project, so, instead of directing investors to other projects, the state accepts everything it is offered, which leads to situations in which there are investors for medical waste treatment facilities, for which there are solutions, but not in the problematic ones, such as waste water treatment facilities.

The reason is that competencies and responsibilities of the state towards the funds and the EU legal frameworks are split, so even though Serbia does have laws regulating the field of waste treatment, there are often slip-ups, the Ministry of Environmental Protection says.

– In order for help to be provided to local self-governments in solving these issues and to better understand the regulations, the ministry needs to be helped, that is, a command center which would be the responsible party needs to be formed – Mitrovic said.

The solutions for the treatment of medicaments, medical, animal waste, as well as the cleaning of wooden materials, have been offered by three companies – Eko Park Trayal Krusevac, Eko Vet Plus Vrbas and Remondis Zrenjanin, which will be discussed in eKapija's upcoming issues.