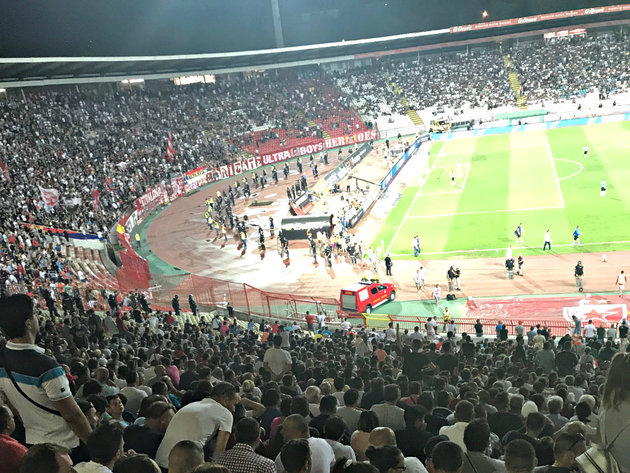 (Photo: Sanja Šojić)
The CEO of Red Star Belgrade, Zvezdan Terzic, has discussed the club's long-term plans at TV Kopernikus, one of which concerns the Rajko Mitic Stadium.

It has long since been clear that the popular stadium will need to be reconstructed in a few years in order to meet the FIFA and UEFA standards, but Terzic also announced its demolition as the most likely option. For now, he has announced additional works on bringing the stadium closer to European standards, but he once again emphasizes that the demolition is inevitable.

– We will start the reconstruction process, but each new job means three additional ones. Those three then lead to nine new ones. In principle, it's much more expensive to reconstruct. We are now getting the UEFA license, in the long term, for five to ten years. The stadium will need to be demolished and a new one will have to be built, as it can't support any sort of reconstruction or raising the level of comfort. In time, UEFA will be more and more demanding – Terzic told TV Kopernikus.

Stadiums are now built to be more than just sports courts. They also need to be modern shopping centers with commercial features.

The CEO of Red Star Belgrade has already discussed this with Serbian President Aleksandar Vucic.

– Red Star Belgrade is currently the only one of the 32 clubs in the Champions League that has a stadium with a running track, which no one has anymore. In order to remove the track in the reconstruction, we would have to move the field all the way to the western stand, leaving us with three stands more to demolish. This would practically require the construction of three quarters of a new stadium. It is therefore better to demolish it and raise a new one with installations, underground garages and so on – Terzic explained.

As for the upcoming autumn, he announced the installation of automatic entrances, which will prevent people from going in without a ticket, just as Partizan did several months ago at its stadium at 1 Humska Street. This will cost the club around EUR 600,000.
Companies:
FK Crvena zvezda Beograd
Tags:
Zvezdan Terzic
Marakana
Rajko Mitic Stadium
UEFA
FIFA
UEFA standards
FIFA standards
Champions League
Red Star Belgrade stadium automatic entrances
football
soccer
football in Serbia
Share: