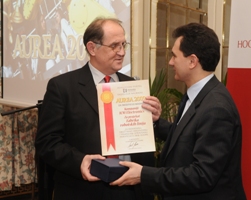 Company "ICM Electronics" is the laureate of "Aurea 2009" award for the best investment in 2008. This company won the award for the project for construction of the first factory of robotic lines in Serbia. In that way, the campaign initiated by investment portal "eKapija.com" was crowned by yesterday’s (March 9th, 2009) awards night in Belgrade-based "Aeroklub", which took place in the presence of numerous representatives of diplomatic corps, business community and media.

The award was granted by Božidar Đelić, the Deputy Prime Minister of Serbia and the Minister of Science and Technology Development.

He said on that occasion that the nominated projects had given certain dose of hope that Serbia had people with great ideas and entrepreneurial spirit even in the difficult times.

- What is going to be very important in the next few years is the presence of ideas that can contribute to improvement of business opportunities. It is necessary that we promote the services and products based on knowledge. It is also necessary that we provide financial and any other support to such projects in order for Serbia to get sustainable position in the international market – said Đelić.

The laureate, company "ICM Electronics", has built and put the first Serbian factory for production and assembling of robotic lines in operation in Platičevo near Ruma. Production unit and administrative building of "ICM" occupy the surface of over 1,000 square meters.

- This award is a great compliment for "ICM Electronics", especially because we have received it from such respectable company and renowned jury. The award has set the new goal for us – to be shortlisted for “Aurea” award next year. Although the new factory has increased our capacities 10 times, further expansion and new investments are in the pipeline – said Dragan Mićić, the CEO of "ICM Electronics". 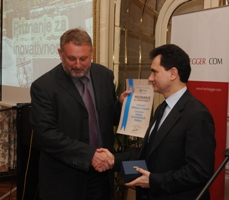 In addition to "Aurea 2009" award, two special certificates have also been granted – for innovation and public usefulness. The title of the useful investment was won by the project of "Kuće Beodom", which concerns construction of low-energy residential buildings. The production of halls of prefabricated ferro-cement elements, the project of "Milinković Company", won the title of the most innovative investment.

Milinko Milinković, the CEO of "Milinković Company", said that his company had won many awards, but that the award granted by “eKapija" meant a lot.

- We’ve received the certificate after 10 years of work on the system for construction of facilities of ferrocement elements, which represents an innovation not only because of the application of technology solutions, but also because of its new philosophy of construction. That system enables cheap and quick construction of school sports halls because 80% of schools either have inadequate halls or have no halls at all – said Milinković. 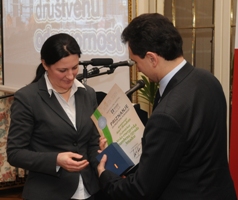 Milena Gojković Mestre, the CEO of company "Kuće Beodom", said that the award represented great acknowledgement of their work. 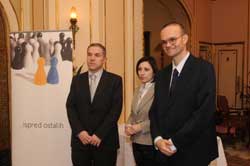 According to the words of Zdravko Lončar, the CEO of "eKapija", the basic criteria for selection of the investment of the year were innovation and originality, as well as public usefulness and financial profitability.

- Good investment projects are not always those on the covers of the newspapers. We wanted to throw a light on the investments that enable long-term sustainable development of Serbia and raise the level of our competitiveness in the international market and, at the same time, take care of the needs of the public community – Lončar said on that occasion. 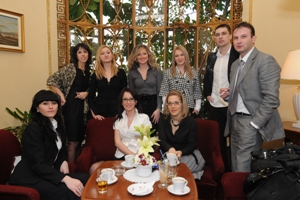 The six-member jury, which consisted of respectable investment experts and businessmen, and the visitors of eKapija’s website selected the winner of "Aurea 2009" award. Realization of the project was supported by "Hochegger Communications Consulting", one of the leading consulting companies in CEE.

In addition to "ICM Electronics", "Milinković Company" and "Kuće Beodom", other nominees for the award were "Metalac", "Sto posto", "Delta Agrar", "NTIM Technology" and "SFERA".