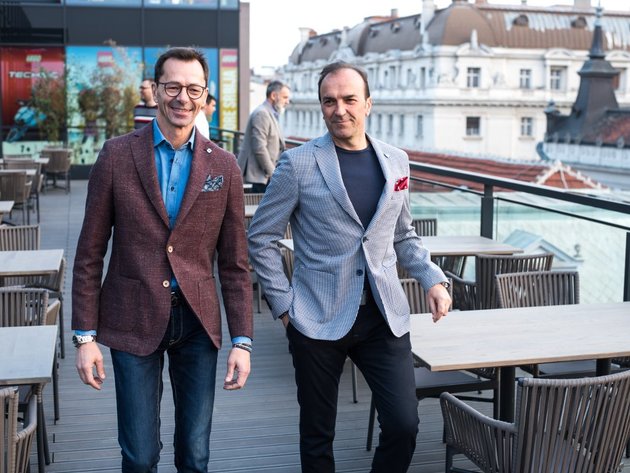 Maurizio Grimaldi and Antonello Facchini
Male clothes and footwear retailer Promoda has been realizing good financial results for four years now. The import increased by 14% in 2017 compared to a year before, whereas the growth of import in the first two quarters of 2018 has already reached 18%. More than 90% of the import comes from Italy, and an overwhelming majority of the goods are produced in this country as well.

Promoda also increased the number of employees from 50 to 63 in 2017 and realized a growth of revenues by 10%, related to the opening of new stores – Navigare at BIG Fashion Center in Belgrade and Barbolini in the Rajiceva shopping center in the Kneza Mihaila Street.

– Barbolini is a male brand which arose from the tradition of tailoring being passed down from from father to son. From the factory production of trousers in the 1970s, through the production of a full range of clothing products in the 1980s, the business arrived to 2010, when the Barbolini brand was formed, as a “total look” for men. The production spread to footwear, shirts, sweaters, ties... What's important is that all articles are fully produced in Italy, that is, everything is “Made in Italy”, which sets us apart from the competition – Antonello Facchini, creative director of Barbolini, said during his recent stay in Belgrade.

He pointed out that men in Belgrade appreciated and followed Italian fashion and that they were capable of recognizing top quality materials and well tailored and produced clothes. He also believes that the price/quality ration offered by Barbolini is very good and that it has contributed to the fact that this brand has become highly prized among men in Serbia.

– We've found a great partner in Promoda, with which we share the values and the vision of the development of the Barbolini brand. This allows me to announce the opening of a Barbolini store at the Promenada shopping center in Novi Sad in late 2018. Also, Belgrade is developing at an incredible rate and we are awaiting with impatience the opening a new, grandiose shopping center within the Belgrade Waterfront. We will surely be present there, and we are also considering an outlet of a larger format – Antonello Facchini announces.