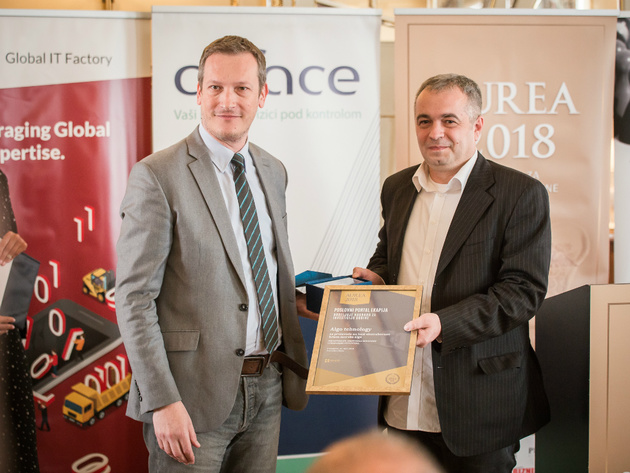 From the award ceremony
The Topola-based company Algo Tehnology has won the Aurea 2018 award for the investment of the year in Serbia, handed out for the tenth year in a row by the business portal eKapija. The award was handed out to the winner at the ceremony at Aeroklub in Belgrade by the deputy general manager of the Chamber of Commerce of Serbia, Mihailo Vesovic.

Algo Tehnology has mastered the technological process of extracting brown sea algae, which differs from known procedures used in the world and which has resulted in the manufacture of products which have been implemented in agriculture as biostimulants and fermentors, as well as in ecology as fermentors for improving the quality of waters and landfill treatment, and a fire extinguishing product. The capacity of the facility in Pranjani near Cacak is 5 tons an hour. The year 2017 was the company’s first year in the market, and around EUR 1.2 million has been invested in research, production and the Development Lab.

– I cannot say how glad I am that our contribution to the development of modern achievements in agriculture and ecology has been recognized. This prestigious award will certainly be an inspiration and the driving engine for our further development and progress. Products based on brown sea algae have been implemented in farms in Serbia, and early this year, we founded a company in Macedonia as well. The sales in that market have started, and we should also start exporting to China by May – said Zeljko Pantic, one of the founders of Algo Tehnology.

In addition to the main award, eKapija has also handed out 3 special prizes. The young company 3F-Fit Fabricando Faber won the innovation award for the MOTIMOVE device for movement assistance to disabled persons. The social usefulness acknowledgment went to two companies: Lafarge BFC for a unique concept of building Lafarge houses and WIG, which developed an automatized system for preparation of saline solutions for efficient filling of oil wells following the exploitation. For the first time this year, a special prize for market potential was awarded, and the winner is the Playerhunter startup with its eponymous social network for athletes.

Editor-in-chief of eKapija, Milica Milosavljevic, pointed out that the growing number of applicants at the contest, year by year, is becoming a tradition.

– In this anniversary year, the tenth year of the Aurea awards, the number of applicants once again showed that innovation is the key factor accelerating the local economy. The variety of the projects shows that innovations are needed in each sector, regardless of whether you are building, producing cosmetics or researching new medical solutions. I congratulate this year's laureates, as well as all the finalists, and wish them many successful years to come.

The winners of the main Aurea 2018 award and the special awards were chosen by an expert jury of six, and the readers of ekapija.com and aurea.rs also cast their votes. The requirement for the participants at the contest was for the projects to have been realized in 2017, while meeting three criteria: innovation, social usefulness and financial potential. 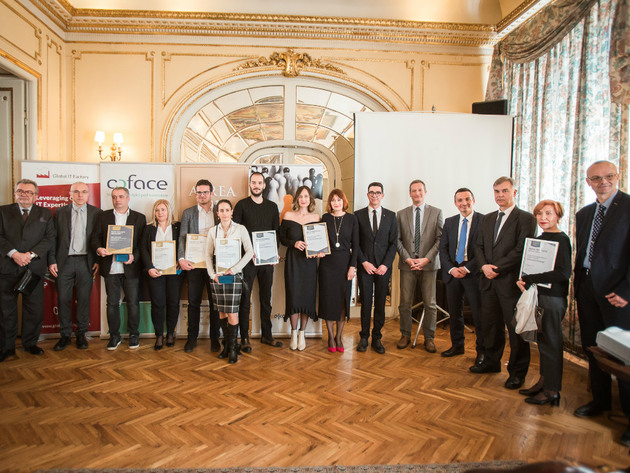 eKapija's strategic partner in the Aurea 2018 project is the insurance company Coface, whereas the project partner is Global IT Factory.

– With today's selection of the most successful innovative investment projects, we promote the best positive examples from our business environment, and, even more importantly, we also motivate other companies to realize that, in our market, hard work, investments and innovations do pay off. That's why it's important to have with us today representatives of companies which show through their results how we should change the economic environment in Serbia. Coface is a socially responsible company which has always worked on creating new values, whether in Serbia or in one of the 100 countries we have a direct offer in, and it is therefore our great pleasure to be the strategic partner in the Aurea 2018 project in this anniversary year – said Djordje Zivanovic, Coface Country Manager for Serbia.

The Aurea 2018 award ceremony at Belgrade's Aeroklub was also attended by numerous representatives of the business sector, diplomatic corps, business associations and media.

The business portal eKapija hands out the Aurea award as part of its orientation towards socially responsible business, without a financial interest, intending to promote and support project important to a sustainable development of the Serbian economy. The direct benefit for the winners, but also all the investments shortlisted for the award, is promotion, which further materializes through increased visibility with investors, easier communication with media, banks, public administration and other potential partners. The initiative of eKapija to support projects good for a sustainable development of the Serbian economy with the Aurea award has resulted in a wide media promotion of over 80 innovative companies in individuals since 2009.

About the winner of Aurea 2019 award

The Topola-based company Algo Tehnology has mastered the technological process of extracting brown sea algae (Ascophillum nodosum) without the use of large amounts energy or expensive chemical processes.

An ecological process of extraction at the base, which differs from known procedures used in the world, has resulted in the manufacture of products which have been implemented in agriculture as biostimulants and fermentors, as well as in ecology as fermentors for improving the quality of waters and landfill treatment, and a fire extinguishing product. With their innovative solutions, they’ve managed to simplify the entire procedure and make it less expensive, making them 30-40% more competitive regarding the price of the final products compared to other producers.

The technology was being developed for several years. The company was officially founded in 2016, whereas 2017 was their first year in the market.

The capacities of the facility in Pranjani near Cacak are 5 tons an hour. They have 5 products in their production line so far: 3 in agriculture and 2 in ecology. Last year, products worth EUR 200,000 were sold in the Serbian market, whereas, in 2018, Algo Tehnology expects to at least double the result.

In January 2018, a company opened in Macedonia as well, and the export of China was contracted and should start by May.

Around EUR 1.2 million has been invested in research, production and the Development Lab so far.