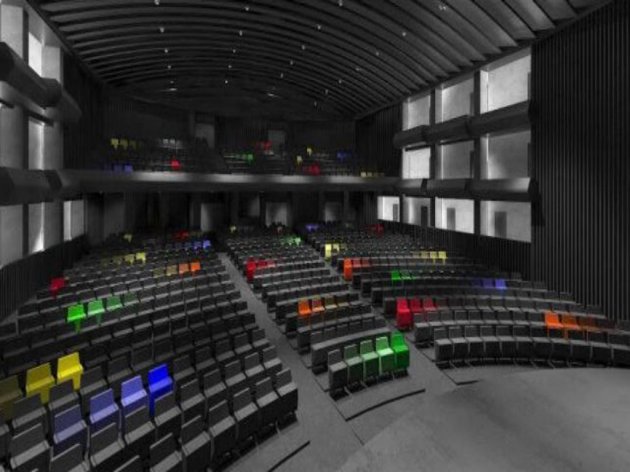 Future look of the grand hall (Photo: beograd.rs)
The renovated Trade Union Hall at the Nikole Pasica Square in Belgrade, will open on April 27, 2018.

Once the works are completed, the facility, the reconstruction of which began on July 1, 2017, will have six halls – a grand concert hall, a theater, a cinema, a congress hall and a festival hall with 1,380 seats, as well as five smaller movie theaters.

The former hall 2 will have 240 seats once the works are completed, whereas the remaining four small halls will have between 60 and 80 seats. The total capacity will thereby amount to 1,900 seats. All the halls and other rooms at the reconstructed Trade Union Hall will be accessible to disabled persons.

As the press was told yesterday, during the tour of the construction works, special attention has been paid to improving the acoustics of the grand hall, as it will serve as a concert hall as well.

The reconstructed Trade Union Hall will also feature a grand hall with a VR zone, entertainment features and a café, an educational entertainment center, a press center, a jazz bar, as well as VIP and Relax wardrobe premises.

Marshal’s Hall will be adapted for VIP events, whereas Jazz Bar Lisabon is to take place of the former Promocija club. The first VR zone in the region will be installed in the grand hall and will provide various types of virtual reality experiences.

The reconstruction of the Trade Union Hall began parallel to the celebration of its 60th anniversary, after it was rented for a period of 30 years in February 2017 by the company MCF MegaCom Films.

Although it was announced at the time that the works would take six to eight months, the entire reconstruction, the value of which will exceed EUR 4.5 million, will be completed ten months from the said date, in late April 2018.

The main contractor is Tri Rest, whereas the electrical works are being carried out by a team of the company Sof Elektro. Mechanical installations have been put in charge of the company Termo & Cold.

All the companies and subcontractors are local, and all the materials and the equipment have been procured from Serbian suppliers.

The Trade Union Hall officially opened on June 13, 1957. In April 2013, the Government of Serbia designated the entire building as a cultural monument.

The hall will have its second official opening ceremony on April 27, 2018, including performances by the Radio Television Serbia Symphonic Orchestra and Francesco Tristano, a pianist and a composer of classical and electronic music.