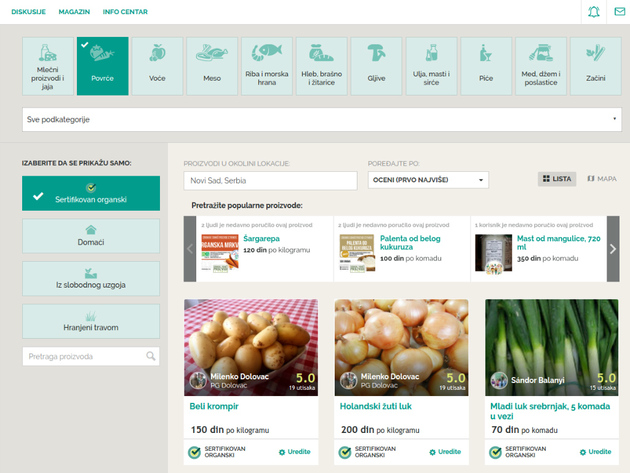 The eKapija portal has opened the contest for the best investment in 2017 – Aurea 2018, and while waiting for the winners to be pronounced, we visited the companies shortlisted last year to see how far they had gone in their business development.

When they were being awarded with a special acknowledgment for innovation by the eKapija portal as part of the Aurea Awards last year, Eton Digital suggested that their digital food market OrganicNet might expand outside the borders of Serbia, namely, to Great Britain.

The company now says for our portal that their plans have changed and become bigger in the past year.

– The penetration of the market of Great Britain is still being prepared and organized, but we did enter the Brazilian market and we are putting all our energy into it at the moment – says Branislava Milosavljevic of Eton Digital.

She adds that they are often asked when the OrganicNet platform will be available in other countries as well, and they intend to conquer new markets and make finding organic food simpler and easier in them as well.

OrganicNet has been operating in Serbia since April 2016, and it is designed as a platform for direct connecting of producers of health food with customers. They say that they now have around 2,000 registered users and at least 10 orders a day in Serbia.

The most demanded products are, of course, fresh fruit and vegetables, which are most often bought in quantities sufficient for several days, due to the specific nature of the products, which are fresh and often prepared the same or the next day.

The extent to which the demand for organic food is growing in Serbia is also shown by the fact that they emphasize that there is a great need for increasing the number of organic producers, considering the consumer demand.

The OrganicNet platform, however, is designed not just as a place where food is bought and sold, but as a venue for sharing knowledge and ideas about health food and promoting a healthy lifestyle.

There's a variety of information, they say, about what health food is, how to eat healthy and how to have a healthy lifestyle.

– Almost every day, there's a new article about new health benefits of a certain type of food, but one should be careful with such information – our interviewee points out and emphasizes that this is why their goal is for the content they publish in the Magazine and the Info Center on the OrganicNet pages to make a difference between sensationalism and truly useful information.

Trust is the key

One of the important questions OrganicNet has had to answer is the control of the quality and the origin of the products sold at the online market, especially those not already certified as organic. 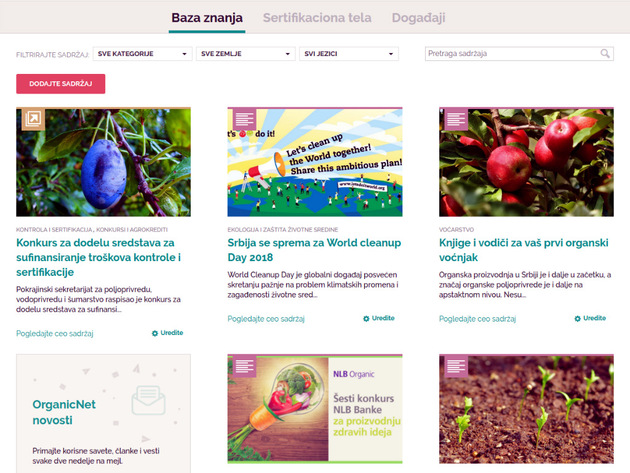 Eton Digital reminds that OrganicNet is based on trust and that both the buyer and the seller can rate and comment on the transaction, which is visible on their personal profiles and available to all users.

– Direct contact and the opportunity to establish an honest cooperation is crucial to the idea behind the OrganicNet marketplace. Users meet each other and establish cooperation through personal contact.

They add that they focus on certified organic food, but that they don't want to deny the opportunity to those producing food organically, but who do not yet own certificates, to offer their products online either.

When it comes to product control, all certified organic producers, as well as those undergoing conversion, must submit valid certificates confirming the status of the food on offer.

– After a new producer registers, we always check if the submitted certificate is valid and for which period, and the document can be downloaded by each purchaser who wants to make sure of the quality and the origin of the product and check the pertinent information. Data on products that are not organic, or are undergoing conversion, are prominently displayed on the producer's profile, as well as on each individual product's page – Branislava Milosavljevic says.

Eton Digital received a grant worth EUR 134,000 from the German Finish accelerator to finance this project.

When asked how complicated it is for emerging business in Serbia to procure the money needed for the early stages of operations, the company says that “those who want to realize an idea will find the way”.

– This is the simple truth. In addition to the grant we received, we are also investing in the project as a company, because we want the platform to keep developing.

On the other hand, they add, the fact is that there are still not that many opportunities to apply for investments and get them. Also, information about contests and opportunities is not easily available, and contests often require a lot of documentation, making the process harder.

– It would certainly be good if there were even more opportunities and if the paperwork were not so excessive, but even so, there's room to find the needed investments and to start realizing the idea – our interviewee says and adds that the Aurea award is “another confirmation that the project is not only useful and needed, but that it also truly raises awareness of the importance of organic food and health food among people”.