Slavko Carić to take over position of President of Executive Board of Erste Bank on January 1st, 2009

The position of the President of the Executive Board of Erste Bank in Novi Sad will be taken by Slavko Carić, former Deputy President, on January 1st, 2009. Former President, Sava Dalbokov, who has been successfully running the process of integration of Erste Bank in Serbia into Erste Group since April 2006, will be appointed to some other high position within the management of Erste Group.

Slavko Carić (37) was appointed Deputy President of the Executive Board of Erste Bank in February 2007. Before he joined Erste Bank, he led one of the most successful broker-investment companies in Serbia - Synergy Capital. Its rich experience and know-how in the domain of banking operations with juristic persons will significantly contribute to further expansion of operations of Erste Bank.

Starting November 1st, 2008, Suzan Tanriyar, the Costs Control Manager within Erste Group with the headquarters in Vienna, will be a member of the Executive Board of Erste Bank in Novi Sad. She will be in charge of accounting and controlling, IT and organization, processing and procurements. Her authorizations will include risk management, internal revision and control of coordination of operations starting from January 1st, 2009. NBS' approval of her appointment is expected.

Suzan Tanriyar (43) is in Erste Group since 1991 and it gained professional experience by running several projects for improvement of efficiency, as well as for implementation of standards of the Group, methodology and managerial tools. She also worked on several projects for integration of local banks into Erste Group and she will be able to additionally transfer know-how of Erste Holding and local banks in Serbia.

Jasna Terzić, who is a member of the Executive Board of Erste Bank Novi Sad since October 2005, will stay on that position and in charge of retail operations, marketing, human resources and legal service.

Analysing the operations of the Bank during his mandate, Sava Dalbokov pointed to constant progress in all significant segments as the most important issue. 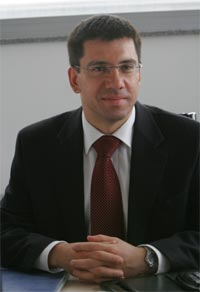 - Over the past two and half years, the offer has been enriched and the quality of services improved and, at the same time, the network of offices has been expanded and work environment enhanced, which all led to better business results. I am especially glad that the concept of socially responsible operations we represent is gaining in importance in the business environment in Serbia. I want to thank all the employees in the Bank, partners and clients for previous cooperation. I fell in love with this country and its people and I will use every opportunity to visit Serbia - said Dalbokov.

As Slavko Carić explained, the basic aim of the President of the Executive Board will be to continue the progress that the Bank started few years ago.

- We want to be one of the best and the most successful banks in Serbia. We have already achieved that in certain segments and we intend to intensify activities in the following period. The conditions were created in the previous period for Erste Bank Novi Sad to become one of the leaders in the market of Serbia - said Carić.