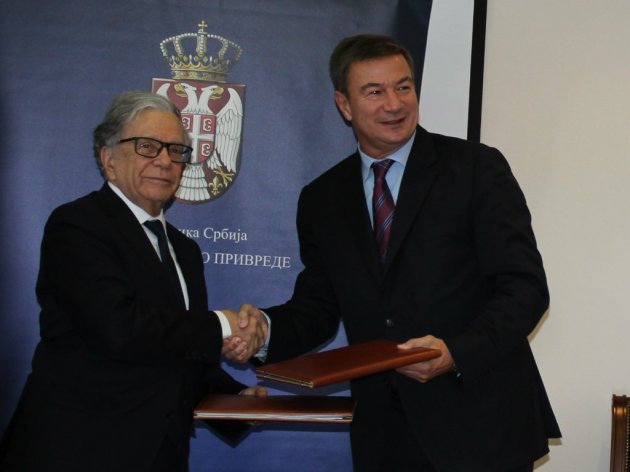 Aelius representative Jorge Costa Da Silva and Minister of Economy Goran Knezevic
The Luxembourg-company Aelius signed an agreement on the purchase of 93.7% of the capital of the Belgrade-based pharmaceutical company Galenika at the price of EUR 16 million at the Ministry of Economy today.

As the ministry announced, the agreement was signed by Minister of Economy Goran Knezevic and representative of Aelius Jorge Costa Da Silva.

Minister Knezevic stated after the signing, which was also attended by the owner of EMS S/A, Carlos Sanchez, that he expected that the privatization would be successful and that it would have a positive impact on Serbia's economic growth, because the purchaser was a renowned company from the pharmaceutical industry.

– The interest of Serbia is for people to work and get paid and for taxes and contributions to be paid, and your interest is to expand your market and make profit. We will help each other achieve these goals – Knezevic said following the signing and welcomed the company representatives to Serbia.

Sanchez stated that the plans for Galenika were to have it transformed and become very important for the entire Southeast Europe.

– We want to have a truly successful company, for our employees to have good salaries and to develop further in Serbia – Sanchez said.

The new owner of Galenika is obligated to pay EUR 25 million to settle the factory's debts towards banks and an additional EUR 200 per year of service to the employees who have opted for the voluntary social program.

The purchaser also obliges to invest EUR 5.525 million in Galenika over the next two years and to keep the number of employees from going below 900 for an indefinite period of time. A total of 250 of 1,400 workers applied for the voluntary leaving.

Aelius, related to EMS S/A Brazil, is the only bidder to meet all the terms for taking part in the process of privatization of Galenika.

President of the Independence union at Galenika, Zoran Pantelic, told Beta that he expected the purchaser to expand the range of products, while keeping all 1,150 workers and increasing salaries, currently at RSD 47,000 on average.

– I expect the new owner to expand the production and take in all the employees, as they are qualified workers – Pantelic said.

He added that “enough workers have been laid off in the past four-five years”, as the number of employees was halved from 2,800 to 1,400.

In addition to jobs, the workers, according to him, expect the new purchaser to agree to a social dialogue and to adhere to the Collective Agreement.

– The Collective Agreement, signed in 2015, expires in late 2018 and I expect negotiations about a new one to begin next autumn – Pantelic said.

He pointed out that, in line with the current Collective Agreement, the workers claim retirement insurance contributions for 2013 and for several months of the current year, to be paid in eight months, as well as unpaid annual leave contributions and jubilee awards for workers who left Galenika earlier.

– The Government of Serbia has reached the decision according to which the claims should be paid, and we will initiate a dispute if they fail to do so – Pantelic said.