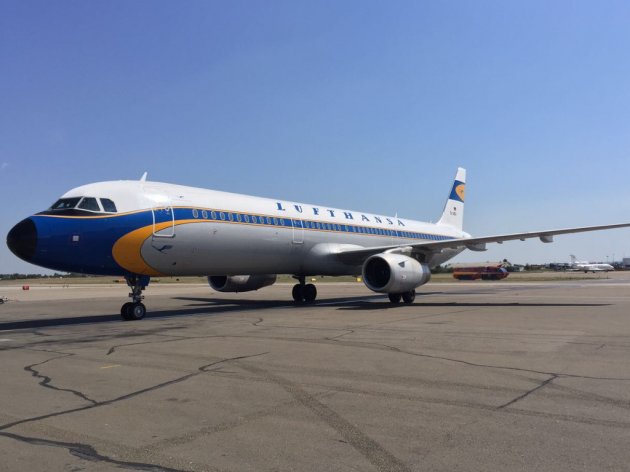 With Lufthansa aircraft landing on LH1406 flight to Belgrade, 50th anniversary of continuous presence of Lufthansa in Serbia was celebrated, and a special event was organized on the occasion in cooperation with Nikola Tesla Beograd Airport.

According to Lufthansa group, jubilee flight was carried out by Airbus A321 which flew from Frankfurt at 10.20 am and to Belgrade at 12.05. The aircraft is retro branded, and the Lufthansa crew was attending the event in retro uniforms. Passengers who arrived from Frankfurt, as well as passengers leaving to Frankfurt with LH1407 flight, received symbolic gifts.

Lufthansa Boeing 727 Kiel first landed in Belgrade on a regular line from Frankfurt August 26, 1967. During that period, this airline also opened another destination in the former Yugoslavia, Zagreb, where it also celebrates 50 years of flying this week. Lufthansa opened a local office in Belgrade already in 1966, it was added in the announcement.

Log in to view complete information:
Forgot your password? Click here HERE
For free test use, click HERE
Latest
Most read
Law on Loan from German KfW Bank for Reconstruction of VMA Building Adopted – Energy Efficiency Worth EUR 50 Million 26.02.2021.
BRNABIC: Serbia Not to Export Lithium as a Raw Material 26.02.2021.
New Measures from the Crisis Response Team – Shopping Centers, Cafes and Restaurants Open Until 2 PM This Weekend 26.02.2021.
Tender for Contractor for Building of Nis-Dimitrovgrad Gas Interconnection Next Week 26.02.2021.
Third BG Subway Line from New Belgrade to Banjica to Have 21 Stations – Detailed Route Presented 25.02.2021.
Demolition of Pinki Hall in Zemun and Construction of Multifunctional Sports and Recreation Center Planned 24.02.2021.
New Facility with Apartments Planned at Silver Lake – Three-floor Building to be Raised Next to the Existing Pool 05.01.2021.
VUCIC: We can produce 20 million doses of the vaccine, agreements on over 10 million signed 16.02.2021.
Weather
Weather forecast