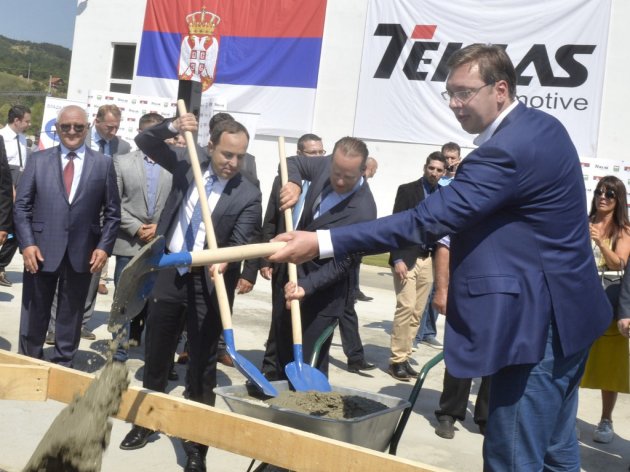 President of Serbia Aleksandar Vucic was also present at the laying of cornerstone, who said that it is good news for Teklas employees that they will receive 13th salary and that the employer provided good working conditions, and, as he said, the construction of a recreational pool has begun today.

He announced that Turkish investors will soon open plants in Zitoradja and Lebane and estimated it is important that Serbia develops evenly and people remain in their places, rather than going to big cities in search for work.

The first plant of Teklas Automotive was opened in Vladicin Han in April 2016. Turkish investor started production pf fluid circulation systems in cars in facilities of former Sloga which it acquired in bankruptcy and the investment totalled EUR 11,35 m.

The first factory of Teklas Automotive was opened in Vladni Han in April 2016. A Turkish investor began production of a liquid circulation system in cars in the former Sloga plants he bought in bankruptcy, and the value of the investment was EUR 11.35 million.

It is planned that the factory in Serbia produces automotive components for Mercedes, BMW, Audi, Volkswagen, Škoda, etc.

Teklas was established in 1971, when the first factory for extruded rubber parts and injection molded parts was opened. Now it has factories in four countries and employs more than 3,600 workers. Teklas today designs, develops and produces liquid circulation systems and wiper systems for large automotive manufacturers.