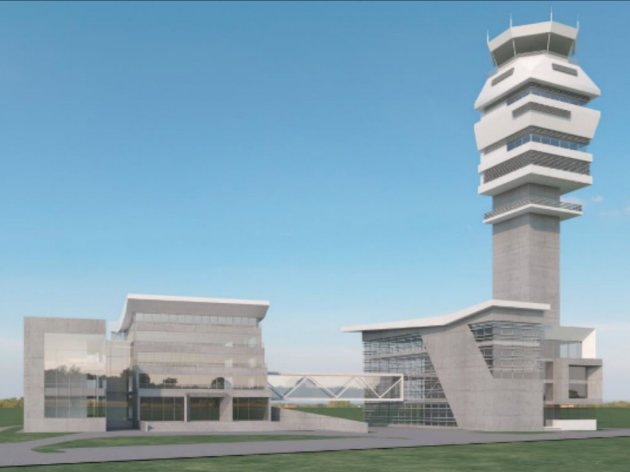 Future look of Control Tower (Photo: smatsa.rs)
The board of the Serbia and Montenegro Air Traffic Services (SMATSA) has adopted a detailed plan of the construction of a new Control Tower at the Belgrade Nikola Tesla Airport, which will be 75 meters tall, the tallest one in this part of Europe and among the ten tallest ones in the world, the SMATSA reported on July 28, 2017.

The construction of a new tower is in line with the plans of the Government of Serbia regarding the concession of the Nikola Tesla Airport, as the new technical equipment will enable a further increase in the amount of traffic and the realization of all the plans of the future concessionaire, the press release says.

All the details of the technical documentation, as added, will be completed by June 2018, and the works will start in the autumn of 2018 and last for a year.

The tower will be built on the land of SMATSA Belgrade and financed from own funds, without encumbering the budgets of Serbia and Montenegro.

– The old tower was built in 1962, when there were 300 planes a year, the amount we now have in the peak hour. This architectural masterpiece will enable even better visibility at the airport and better working conditions – the SMATSA says.

The facility will feature the latest technology in line with European regulations and standards, and the building will be energy efficient and built from eco-friendly materials.

The preliminary design was prepared by Energoprojekt Industrija, and the construction will be put in charge of local contractors.

– This is a very important project for the SMATSA as well, as it will unify the regional, terminal and airport flight control – the SMATSA says in its press release.