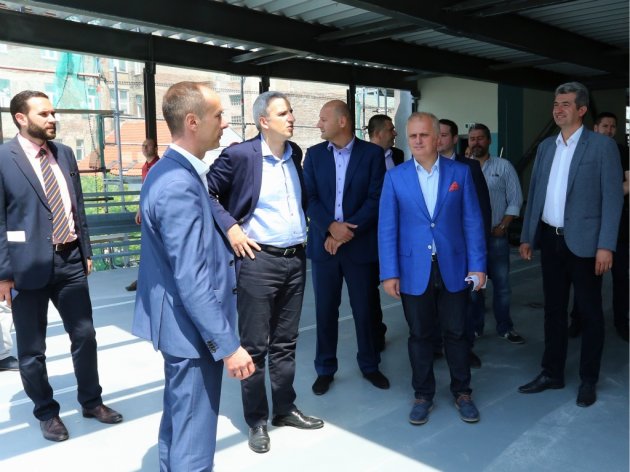 Deputy Mayor Andreja Mladenovic said during his tour of the construction site that the reconstructed garage had 200 parking spaces, thereby solving the problem that had been present in the city's center for years.

– The works were hard and serious and the entire structure needed to be secured by laying down piles. All the existing construction elements, which were so ruined that the garage was facing being closed down, have been reconstructed. This way, we have been provided with a safe and long-lasting facility – Mladenovic pointed out and added that the investment was sure to pay off in the coming period.

According to him, along with the reconstruction of the Obilicev Venac Street and the Marsala Birjuzova Street, the city has gotten a representative area in its center.

– The Obilicev Venac Street has also been fully reconstructed and turned into a pedestrian zone, and the value of the works exceeds RSD 200 million – Mladenovic emphasized and thanked the Parking Service, which, as he said, invested, together with the City of Belgrade, in the reconstruction and renovation of the garage.

City Manager Goran Vesic said that the first phase of the reconstruction in the Obilicev Venac Street had been completed and that hydraulic retractable bollards were to be installed, preventing cars from entering the pedestrian zone. He announced that the Kosmaj passage, next to the Obilicev Venac garage, would be renovated, as it was in a very bad condition at the moment.

– The second part of the Marsala Birjuzova Street, from the Kosmaj passage to the turning towards Zeleni Venac, will be completed by August 1. After that, it remains to complete the final part of the Sremska Street, from the Albanija building to Zeleni Venac. A total of RSD 296 million has been set aside for the works in the Obilicev Venac Street, whereas the works currently being carried out in the Gracanicka Street, the Cara Lazara Street, the Delijska Street and the Nikole Spasica Street cost RSD 197 million and those related to the garage cost RSD 500 million. The city has set aside a total of a billion dinars in order to develop this part of the city – Vesic said.
Companies:
Grad Beograd
JKP Parking servis Beograd
Tags:
renovation of Obilicev Venac garage
Obilicev Venac garage
Andreja Mladenovic
reconstruction of Obilicev Venac
Marsala Birjuzova Street
pedestrian zone in Belgrade
Goran Vesic
Kosmaj passage
Zeleni Venac
Sremska Street
Share: