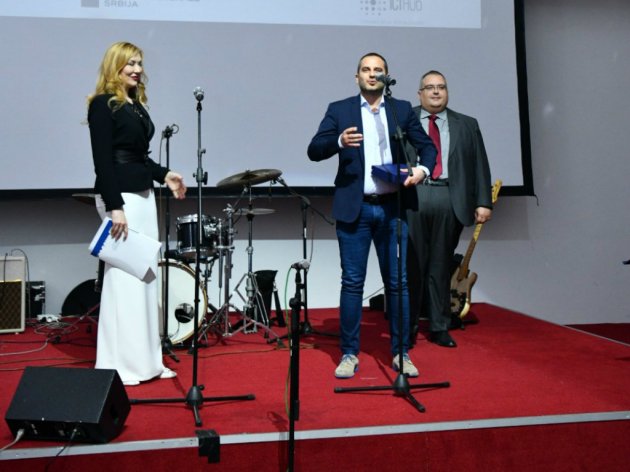 From the award ceremony
The French-Serbian Chamber of Commerce held its traditional gala evening for its member-companies, partners and friends for the sixth time on Thursday, May 25.

On that occasion, the chamber handed out its annual Grand Prix awards in three categories. The Grand Prix for innovation was won by Societe Generale for its strategic cooperation with ICT Hub to the end of enhancing cooperation with fintech startups. Fly Fly Travel won in the category of socially responsible business activities for its free professional courses within the Fly Fly summer school. The chamber also awarded a Grand Prix for a special contribution to the development of bilateral cooperation to Dr Radan Dzodic, director of the Oncology and Radiology Institute of Serbia, a French student and a renowned Serbian oncologist, for the agreement on fighting cancer signed last year between France and Serbia.

The guests were addressed by the president of the chamber, Dragoljub Damljanovic, who pointed out that France was fostering talented people in various fields, in art as well as in economy and industry. The French companies in Serbia also encourage talented people, entrepreneurship, being proactive and taking the initiative through their business culture, Damljanovic said.

Ambassador of France to Serbia Christine Moro reminded in her introductory speech that the trade between Serbia and France had grown by 12% in 2017 and that the trend of growth was continuing. She also announced that her mandate in Serbia was ending soon and wished success to the French companies in their further activities.