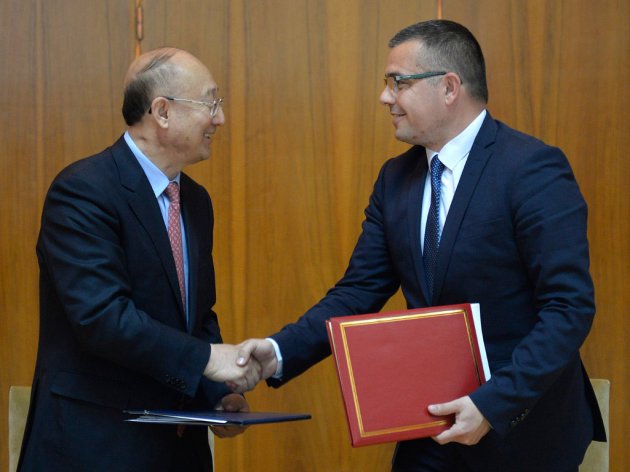 The Ministry of Agriculture and Environmental protection of Serbia and representatives of the General Administration of Quality Supervision, Inspection and Quarantine of China (AQSIQ) signed the Memorandum of Understanding on cooperation in the field of safety guarantees for food products meant for export and import today.

The agreement was signed by Minister of Agricluture of Serbia Branislav Nedimovic and ASQIQ Minister Zhi Shuping.

As reported by the ministry, Nedimovic said that the memorandum was an umbrella document which would enable Serbia to export plant and animal products, above all those the Chinese market found interesting, namely, various kinds of meat, milk and milk products, corn, sugar beet and prunes.

– This is an umbrella document allowing us to form expert working groups in various fields in order to solve issues related to the export of various types of meat and certain plant products as soon as possible – he said.

He also said that the protocol of sharing scientific information regarding the disease of nodular dermatitis had been signed with AQSIQ representatives.

Furthermore, AQSIQ representatives were presented with a translated questionnaire dealing with the export of pork meat, which is the starting point towards the realization of the export of this type of meat, especially the frozen variety, another arrangement, the minister emphasized, which should be completed soon.

Next week, Nedimovic announced, the Chinese side will also be presented with a filled-out questionnaire regarding the export of plant products, above all mercantile corn, prunes and molasses, and it is expected that the export of this type of goods should also start soon.

The Serbian side also shared information and questionnaires about the possibility of the export of milk and milk products, as well as baby milk from Serbia to China, with the Chinese representatives.

Aside from the business entities from Serbia looking to export to China, there are also several Chinese investors interested in investing in Serbia's food industry, i.e. the milk and meat sector and the removal of administrative obstacles regarding food safety also creates conditions for unobstructed realization of those investments, Nedimovic emphasized.

Zhi Shuping said that Serbia and China had traditionally good relations, which were at the highest level at the moment, and that the signing of the documents was very important to the end of ensuring food safety, as that was a necessary requirement for it to find its way to the Chinese market as soon as possible. Shuping also met with President Tomislav Nikolic, and representatives of AQSIS confirmed on that occasion that China was interested in importing 500,000 tons of beef from Serbia annually.
Companies:
Ministarstvo poljoprivrede, šumarstva i vodoprivrede Republike Srbije
Tags:
General Administration of Quality Supervision Inspection and Quarantine of China
AQSIQ
Ministry of Agriculture of Serbia
Branislav Nedimovic
Tomislav Nikolic
Zhi Shuping
export of meat
export of meat to China
export of beef
export of beef to China
beef
Memorandum on Safety and Quality in Food Trade between Serbia and China
corn
prunes
sugar beet
food industry of Serbia
export of milk to China
export of milk products to China
export of pork meat to China
nodular dermatitis
lumpy skin disease
Share: