AIK buys Alpha Bank – Jubanka name to be brought back 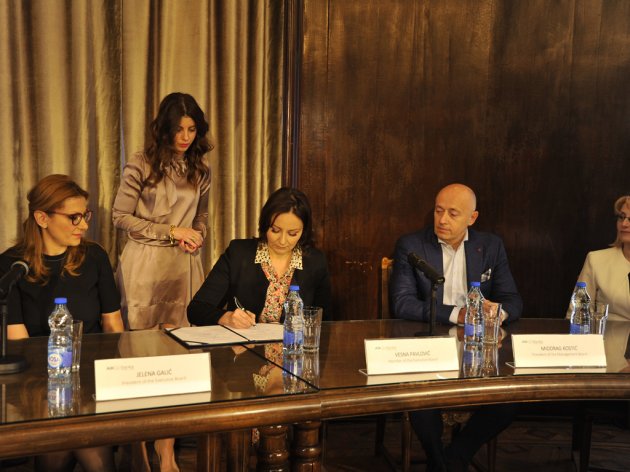 Jelena Galic, head of AIK Bank Executive Board, Vesna Pavlovic AIK Bank board member, and Miodrag Kostic at the signing
AIK Bank took over 100% of Alpha Bank Serbia's shares on April 11. The agreement was signed in Alpha Bank's headquarters in Belgrade. The bank is officially to change its name to Jubanka a.d.

This symbolically confirms its return to the group of banks operating with local assets, as the name of Jubanka has been familiar to the Serbian financial market since mid-20th century.

The new Jubanka Executive Board was presented as well, to be headed by Aleksandra Erdoglija, a long-term member of Alpha Bank's management team, thereby securing the continuity of operations, AIK reported yesterday.

The positive effects of the acquisition are expected to be seen in all segments, primarily in increased income and the expansion of the pool of clients in all the segments the banks operate in.

– The acquisition of Alpha Bank will create a synergy between two financial institutions, one of which, AIK Bank, is highly capitalized and in the top of the Serbian banking market, with balances amounting to RSD 175.3 billion at the end of 2016. The transaction will enable both banks to act jointly in the Serbian market. Furthermore, the synergy is very significant due to the fact that Jubanka will once again be locally owned – said Jelena Galic, head of AIK Bank Executive Board.

AIK continues to expand its operations and the pool of clients and partners both within Serbia and outside it, to the EU market.

This February, AIK Bank was given authorization by the European Central Bank for further acquisition of the shares of Gorenjska Banka from Kranj, Slovenia. Based on this decision, AIK Bank can acquire up to 100% of the assets and voting rights in Gorenjska Banka. AIK Bank's activities such as this do not only result in the expansion of cooperation with the local market and the EU market in the domain of banking, but also create conditions for expanding operations to other fields, thereby strengthening the economic competitiveness of the entire region, the press release says.
Companies:
AIK Banka a.d. Beograd
JUBANKA A.D. BEOGRAD
Tags:
AIK Bank
Jubanka
Alpha Bank
Jelena Galic
Vesna Pavlovic
Miodrag Kostic
acquisition of Alpha Bank
Aleksandra Erdoglija
Share: