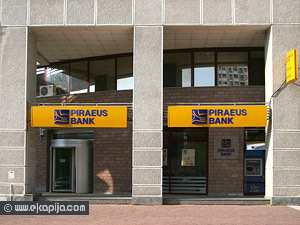 Piraeus Bank Serbia has ambitious business plans and is not for sale, General Manager Vojislav Lazarevic stated on February 22.

– We are very pleased with the results made in 2016. The bank's profit amounted to RSD 26 million, and the portfolio of good loans to legal entities doubled, showing the bank's dedication to the local market and the development of the Serbian economy – Lazarevic said to the press.

He pointed out that the bank didn't need to look for new owners, get a capital increase or merge with another bank.

Piraeus Bank, a member of the eponymous Greek banking group, has 26 branch offices in Serbia and employs around 450 people.

General Manager of Piraeus Bank Serbia pointed out that the NPL rate in Serbia had been reduced by around 10 percentage points, from 34% to 24%, and that he expected it to drop further before the end of 2017.

– The share of NPLs was mostly reduced through write-offs and debt collection, but also through the growth of the bank's credit activity – Lazarevic said.

The bank's plan, as he added, is very ambitious, entailing a growth of 25% in the dinar retail loans segment and of 19% in the corporate loans segment. A growth of operating income by 10% and an even further growth of crediting are also planned.