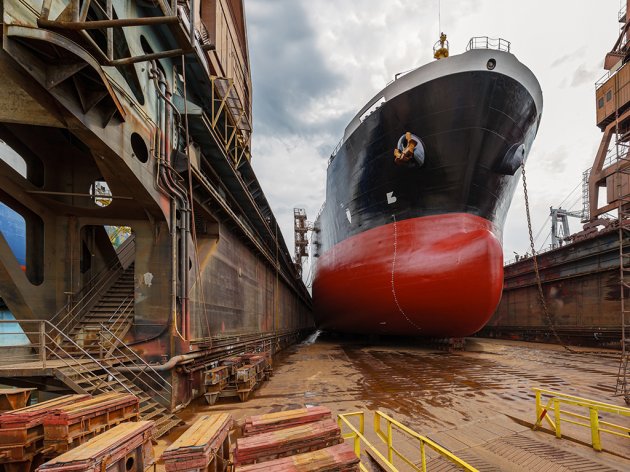 (Photo: Nightman1965/shutterstock.com)
The management of the ABC TWO EAD Group from Sofia has opened the first tender for the sale of the Apatin Shipyard at the price of EUR 2,326,000. The tender documentation costs EUR 64, and the sale is open until March 16.

Vojvodjanska Banka transferred the ownership of the company to the Bulgarian bank, which also operates within the National Bank of Greece Group, in January 2016.

– The shipyard spreads over nine hectares, two of which are covered by roof, and has the registered right of use of the 22 ha water area in the Danube bay. The shipyard is also known for its synchronized elevator for large ships. At the moment, private companies are operating in it, mostly repairing leased ships – says Mladen Manojlovic, the director of the shipyard.

Those familiar with the current situation in the formerly strongest river shipyard in the country remind that the fate of this once successful company has been changing since the beginning of the privatization procedure.

Vojin Lazarevic bought the shipyard in 2003 for around DEM 300,000 through old foreign currency savings bonds. Lazarevic declared bankruptcy in 2010. The Bankruptcy Supervision Agency sold the shipyard to Vojvodjanska Banka in 2012 for RSD 230 million at the auction also attended by Miodrag Kostic, who offered RSD 130 million. As Vojvodjanska Banka was the shipyard’s largest creditor at the time, the identical amount was returned to the bank immediately after the payment was made.

Numerous, mostly foreign purchasers have been interested in the shipyard, though there have also been local ones. The latest potential buyer came about a month ago from Italy, representing the metalworking company Easteon, and visited the shipyard through the local self-government. As Novosti learned at the time, the Italian representative said that, if the purchase was to go down, they would need workers of all profiles – from welders and pipe-fitters to locksmiths.

The former Danube giant used to build trans-Atlantic ships for Norwegian clients in its time. The shipyard might be brought back to its old glory with a new owner, considering its favorable location at the tri-border area between Croatia, Hungary and Serbia.