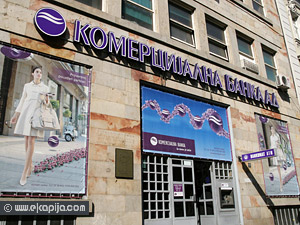 The second biggest local bank, Komercijalna Banka, expects that it will become profitable again in 2017, as it has cleaned its balances from NPLs, said the bank's CEO, Alexander Picker, for Reuters.

The Government of Serbia intends to privatize the bank by the end of the year, but hasn't yet decided whether this will be done through an initial public offering (IPO) or a private sale, Picker said.

– Which way the privatization goes remains to be seen. Everything is possible, from a strategic investor, a fund, or even an IPO, but the answer to this question is up to shareholders – he added.

It is expected that Komercijalna Banka will report a loss for the second year in the row (following the 2015 loss), partly due to provisions against bad loans which totaled one fourth of its lending.

– The year 2016 was difficult. We finished the clean-up of the problem loan portfolio and other impairments. We went to every small closet we could find and we hopefully did dig up all the skeletons, pulled them out and cleaned them. That should enable us to turn a profit this year – Picker said.