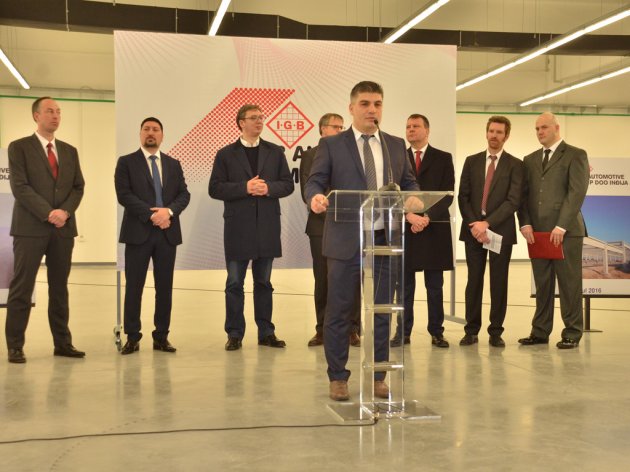 From the opening ceremony
The new facility of IGB Automotive, which produces car seat heaters, opened in Indjija today, and the value of the investment is EUR 4.5 million.

The construction of the 7,800 square meter facility started in April 2016.

IGB Automotive was founded by the German company I.G.Bauerhin GmbH in 2007 and it currently employs 2,200 workers. The company has received subsidies for employing new workers from the Government of Serbia.

The group has production facilities in several countries, and the factory in Serbia is the largest one and employs the largest number of workers.

The annual production of IGB Automotive is 20 million products.

The opening of the new facility of IGB Automotive was attended by Prime Minister Aleksandar Vucic, President of the Provincial Government Igor Mirovic, Ambassador of Germany to Serbia Axel Dittmann, the general manager of the company, Dalibor Beric, the co-owner of the German group Karsten Hilmer, the president of the Municipality of Indjija, Vladimir Gak, and others.

Dalibor Beric, General Manager of IGB Automotive Comp Indjija, addressed the numerous guests and said that the construction of the new facility had been realized in line with the plan.

– Behind us is a great result, and ahead of us is a great responsibility and the desire to keep growing and succeeding. In under 8 months, we`ve managed, parallel to current activities, production and regular product shipment, to achieve another important strategic goal – to raise a production facility worth EUR 4.5 million, employ more than 600 new workers, introduce new products and implement new technology – Beric said.

Karsten Hilmer welcomed the attendees on behalf of the management of the I.G.Bauerhin Group. He also said that, in addition to the Indjija facility, new facilities were planned in China and Mexico.

– The foundation stone will be laid down in Mexico tomorrow, which will mark the official beginning of the construction of the new 9,000 m2 factory. It will be producing for the North American market – Hilmer said.

Volker Prescher, Production Manager for Europe, pointed out that he was pleased that the investment in Indjija had exceeded expectations.

– I want to thank everybody who took part in planning and realizing the project, especially the construction company and the management, who raised the high quality production facility in record time. Employees in Indjija have done a lot in the past months. They managed to increase the production, reduce the delays in shipment and establish a normal component shipment flow. Along with new employments, in addition to the expansion of the production, we will also develop technical departments. Above all, the processing technology, development, construction, tool and machinery manufacture, for which we will need a large number of engineers. In that sense, we will continue cooperating with universities, which will lead to an even greater development of IGB in a long term – Prescher said, as reported in the IGB press release.