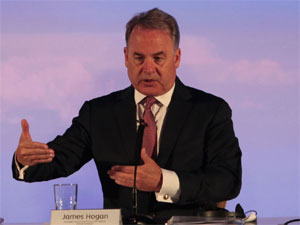 James Hogan
Etihad is looking for a way to return their investments in two companies operating with losses – Air Berlin and Alitalia. Etihad bought a share in the German company in 2011, and in the Italian company in 2014, as part of its strategy to expand its network. However, the two companies have failed to meet the expectations.

James Hogan, president and CEO of the Etihad Group, says that other companies in which Etihad has invested, Air Serbia, Jet Airways, Air Seychelles, Virgin Australia and Etihad Regional, have all become more efficient and profitable.

– In those cases, our long term investments are already delivering a return. However, we have faced greater challenges with Air Berlin and with Alitalia. Both are operating in very tough competitive environments, and need to address long-standing issues facing their businesses – he said.

– We remain committed to our partners, as the strategy of establishing partnerships is the key element of the development of the Etihad Group's operations – Hogan said and added that the investments had had a direct impact on the revenues and had brought hundreds of millions of dollars of additional revenues.

Hogan says that the operating strategy of each individual airline has remained in charge of the local management.

– We are happy to support managements and provide advice when we are asked to do so, but the implementation plans are in their hands – he added.

Hogan denied that Etihad was looking to acquire a 40% share in Lufthansa and said that they were interested in some form of partnership, but not the purchase of shares.