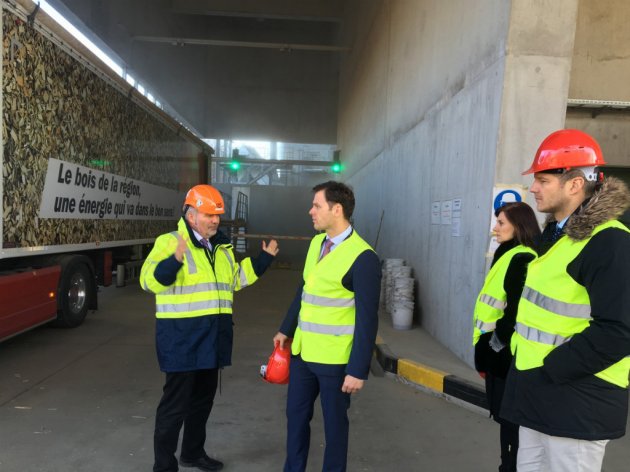 Belgrade delegation visiting EWB (Photo: beograd.rs)
By the end of December, Belgrade will receive offers from four renowned companies for a public-private partnership for the construction of a waste treatment facility, said Mayor Sinisa Mali on Friday, December 2.

He announced during his visit to the Bern renewable energy center EWB that Belgrade too could count on having one such factory raised to the end of permanently resolving the waste issue in the capital of Serbia.

– Next year, a partner will be selected for the construction of a factory for turning waste into thermal and electrical energy, through an investment worth EUR 300 million – Mali said and reminded that the city had been looking for a partner for the PPP for a year an a half.

The first step is to collect bids, followed by the selection of a partner and the beginning of the realization of the project in 2017, the mayor said, as reported by Beoinfo.

Mali reminded that the Vinca landfill was “the biggest black spot” in that part of Europe at the moment, as waste had been disposed there for decades.

– There are tons of garbage there, and we can see here how smart people turn waste into energy to heat the city, sell electricity and earn money. This is what we are going to do as well in order to have a cleaner city and cleaner air and make money as well – Mali said and added that, once the offers had been collected, they would be presented to the citizens.

As CEO Daniel Schafer explained, EWB is a public utility enterprise of the city of Bern dealing with waste collection and production and distribution of electricity, natural gas and water.

– We are an independent public enterprise, we have our own board of directors guaranteeing the operations are harmonized with the consumers' needs – Schafer said.

He pointed out that the electricity is produced from the collected waste in their thermal power plants and specified that the annual electricity consumption amounted to 1.6 terawatt hours and that the same amount of natural gas was consumed. He added that the annual turnover of EWB was around CHF 500 million.
Companies:
Grad Beograd
Tags:
EWB Switzerland
public private partnership
waste treatment facility
Sinisa Mali
renewable energy center Switzerland
waste treatment factory
Vinca landfill
Daniel Schafer
production of electricity from waste
Share: