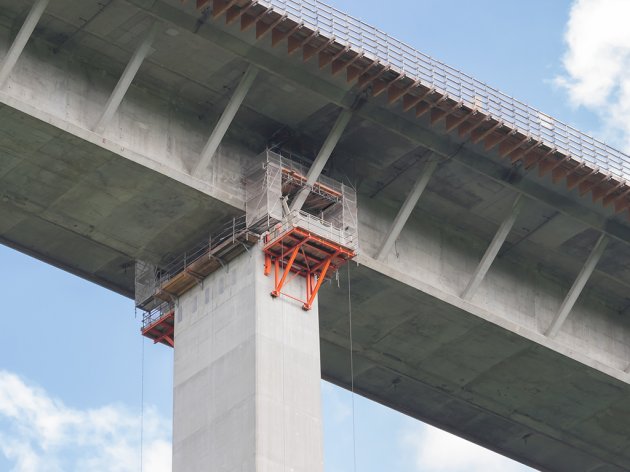 Illustration (Photo: ThomBal/shutterstock.com)
The construction of twin bridges on the Sava near Ostruznica, as part of the bypass route around Belgrade, has started several months late, which is evident from the construction site. Of the new bridge construction, only the outlines of the load-bearing columns on the right bank are visible. Excavations for future concrete girders have been made, with iron reinforcement sticking out of them, but there is still a lot of work to do – as much as three quarters of the works remain for masons to complete in 2017.

At the official opening of the construction site, in early 2016, Zorana Mihajlovic, minister of construction, transport and infrastructure, announced that 10 local companies would be employed on the project and that more than 200 would work on the construction of the bridge each day, and that around 350 would be working later on. However, the number of workers currently on the site can be counted on the fingers of two hands. January will mark a year from the official beginning of the works, and, as it was meant for the construction to last 790 days, it should have been halfway finished by now. However, the contractor didn't manage to compensate for several months of delay, caused by unfavorable weather conditions.

– At the bridge on the Sava at Ostruznica, works are being performed on all structures of which the construction consists of, except for the section across the new Obrenovac road, where the works are planned to start at the end of the year – they say at the Roads of Serbia.

The bridge is a part of the bypass route around Belgrade, the value of the project is RSD 3.57 billion, and it is being financed from the loan by the European Investment Bank. The main contractor is a consortium led by Strabag.
Companies:
JP Putevi Srbije Beograd
STRABAG d.o.o.
Ministarstvo građevinarstva, saobraćaja i infrastrukture Republike Srbije
EIB
Tags:
bridge on Sava near Ostruznica
bypass route around Belgrade
Obrenovac road
Zorana Mihajlovic
EIB
bridge at Ostruznica
Ostruznica
Share: