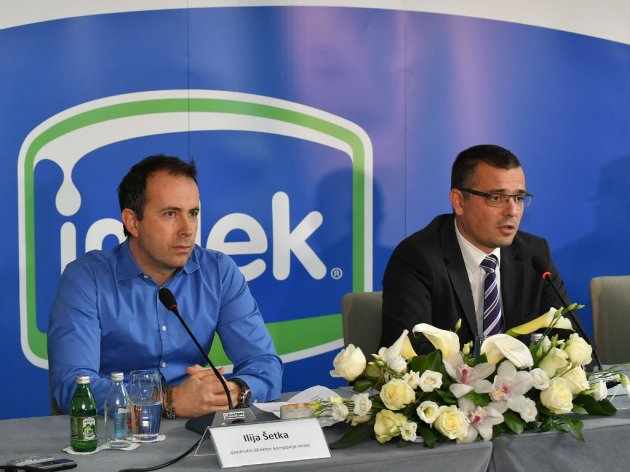 Ilija Setka and Branislav Nedimovic
Imlek has invested more than EUR 30 million in improving production processes, innovations, new product development and support to farmers through the purchase of mechanization and loans in 2016. With these investments, Imlek has increased its market share in all the countries of the region, and by investing in various projects, the company has stimulated the growth of the entire milk industry.

– By investing EUR 30 million, of which EUR 24 million in Serbia and EUR 6 million in the region, and launching more than 40 new products, we have confirmed that we have further strengthened our status as the biggest producer in the milk industry of the entire region. I am especially proud that we have managed to help our most important partners, our farmers, in a year marked by unprecedented disruptions in the European raw milk market and record low prices. We have helped them both by having higher buyout prices than those in Europe and by purchasing machines and providing loans, in order for them to endure the period as easily as possible – said Ilija Setka, general manager of Imlek, at the overview of the annual results held on November 29.

He pointed out that Imlek had expanded its capacities, increased the efficiency and procured modern equipment for quality control of raw milk and finished products, and that the large segment of investments in production innovations had contributed to consumers' getting new milk products whose quality and taste were comparable to the European and world standards.

– We have also realized numerous socially responsible activities, among them the “Moja kravica Rasti srecno” campaign, which has initiated the construction of children's playgrounds throughout Serbia. We are planning big investments in the next year as well, with the aim of, above all, improving the company's operations, but also contributing to the community we are doing business in – Setka announced.

Thanks to the introduction of milk import taxes, Imlek has maintained its production, and paid an average price of 30 cents per liter of milk to farmers at the time its European market average was around 20 cents. The company bought out 30,000 tons of milk at the time it didn't need raw materials and processed it into powdered milk, in order to help farmers maintain the production.

– We have secured EUR 3 million for loans to farmers – Setka said.

The manager of Imlek noted that the milk import taxes, used by the state to protect the milk industry in 2016, had proved to be a good measure which helped maintain the livestock population and the base of raw materials. Nevertheless, he said that customs protection wasn't and couldn't be a long-term solution and added that he believed that, even if the milk import taxes were abolished on January 1, 2017, milk producers would persevere in the market.

Minister of Agriculture and Environmental Protection Branislav Nedimovic announced on the occasion that the decision on whether the taxes would be abolished would be reached 15 days from then, as the milk market analyses were still being carried out in cooperation with the European Commission. He also said that the agricultural budget for 2017 would certainly be bigger than the one for 2016.

– The milk quality control lab will start working in March or April 2017 and the price of milk will be determined by quality from then on, and the state will continue to aid the milk production sector. Those with the milk of the best quality and an ambition to develop the sector will be given the priority – Nedimovic pointed out.
Companies:
Imlek a.d. Beograd
Ministarstvo poljoprivrede, šumarstva i vodoprivrede Republike Srbije
Tags:
Ilija Setka
Branislav Nedimovic
Imlek annual results
price of milk
milk buyout
milk import taxes
social responsibility
Moja kravica Rasti srecno campaign
agricultural budget for 2017
Share: