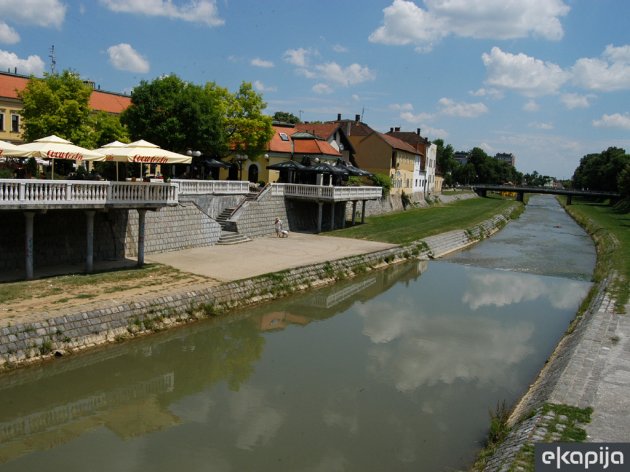 (Photo: Suzana Obradović)
The tender for the recovery and regulation of a section of the beds of the Kolubara in Valjevo and the headwaters of the Obnica and the Jablanica, which form the Kolubara at the entrance to the city. The works are expected to start in early 2017 and should last for 18 to 24 months. The total cost of the project exceeds EUR 4 million, and the funds are provided by the European Union.

This was confirmed by Head of the EU Delegation to Serbia Michael Davenport, who took a tour of the Kolubara watercourse near the facility of the company Austrotherm, where the works on the construction and development of the river bed are to be performed. Davenport reminded that the EU had set aside around EUR 8 million for projects of recovery and prevention following the 2014 floods which hit Valjevo.

Thanks to the IPA funds and the Solidarity Fund, 23 houses have been built in Valjevo, 20 damaged households have been reconstructed, 1,150 farmers have received aid in animal feed and fertilizers and 40 small enterprises have been provided with support in recovering the production.

The European funds have also been used to reconstruct the Medical School in Valjevo and the ambulance in Divci and raise the bridge on the Obnica. What follows are investments in the development of the river beds, which were damaged significantly in the May 2014 floods.

Fabio Drago, manager of the Austrian Development Agency (ADA), which has been put in charge of implementing the recovery projects in the flooded areas by the EU, emphasized that the works would be performed in five sectors and added that he would be very pleased if everything was realized with the amount of EUR 4 million. The remaining amount might be used for additional works in Valjevo.

According to the available information, the project entails the development of 1.1 kilometers of the Kolubara river bed from Austrotherm to the bridge at the bypass route at the eastern outskirts of Valjevo and the development of 300 meters of the river bed from the Pecina park to the confluence of the Obnica and the Jablanica, at the opposite end of the city. Furthermore, the plan is to reconstruct and bring back to its previous state the 2.7 km section of the river bed from Austrotherm to the white bridge at the Grand Hotel in downtown Valjevo.
Companies:
Delegacija Evropske unije u Republici Srbiji Beograd
Grad Valjevo
FOND SOLIDARNOSTI BEOGRAD
Austrijska razvojna agencija -Austrian Development Agency ADA Wien
Tags:
Delegation of the EU to Serbia
Michael Davenport
the Kolubara
Dragan Jeremic
the Obnica
the Jablanica
IPA funds
Solidarity Fund
Fabio Drago
Austrian Development Agency
ADA
Share: