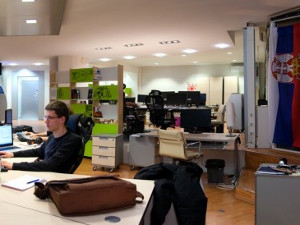 (Photo: devana.rs)
According to Post Status, the American company GoDaddy, the largest internet domain registrar, has bought the Serbian Manage WP, a service for managing a large number of WordPress websites, made by the Belgrade-based Devana Technologies. The terms of purchase are not public.

ManageWP was founded in 2010 and officially launched in 2012. They immediately got competition in the shape of 20 companies which launched directly competing product.

Despite strong competition, ManageWP's initial market advantage helped them earn USD 100,000 in the first month, remain relevant as partners and become a target of acquisition attempts by internet giants such as GoDaddy.

GoDaddy manages over 60 million domains for its 13 million clients. However, it's not the domains that make profit for registrars, as the margins on such products are relatively small.

The true profit comes from additional services, the so-called upsell options, precisely the type of service provided by ManageWP. At the same time, each new sales channel means a lot to ManageWP, and they don't come much bigger than the largest internet domain management service. The deal makes perfect sense viewed this way.

The terms of the deal have not yet been made public, and according to some allegations by Post Status, it has been structured so that it takes into account the future product performance. ManageWP will remain an independent product, but it will be integrated into the GoDaddy Pro platform. It's worth noting that the entire Belgrade team, consisting of 30 people at the moment, will continue to develop the product.
Companies:
Devana Technologies d.o.o. Beograd
GoDaddy.com
Tags:
ManageWP
service for maanging a large number of WordPress websites
Share: