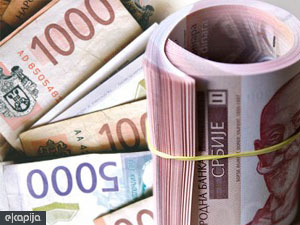 The state budget surplus at the end of August is RSD 20 billion, which is a result better than planned by RSD 95 to 100 billion, stated Prime Minister Vucic on Monday, August 22.

– In September or October, we will start having talks with the International Monetary Fund about raising salaries in the public sector. How big the raises will be in percentages, I can't say yet, but they will be bigger than the previous ones. There's no doubt that the minimum wage in the public sector might be increased by around RSD 1,000. That's not enough, but, for those who complain the least and work hard, it's like an additional salary – Vucic said.

He added that the growth in the electrical energy sector is expected starting with August, which would additionally boost the growth of GDP, and that he was happy to see that the interannual inflation rate was low at 1.2% and that the turnover in trade was growing, as well as that nearly all the vacation vouchers in Serbia had been used.

Vucic pointed out that the unemployment rate was the lowest since 2007 at less than 16%, but that his goal was to lower it to the EU average of 11.5% within the current government's mandate.
Companies:
Vlada Republike Srbije Beograd
Međunarodni monetarni fond - MMF Beograd
Tags:
budget of Serbia
budget surplus
Aleksandar Vucic
International Monetary Fund
IMF
raising salaries in public sector
minimum wage
GDP of Serbia
inflation in Serbia
vacation vouchers in Serbia
unemployment in Serbia
Share: