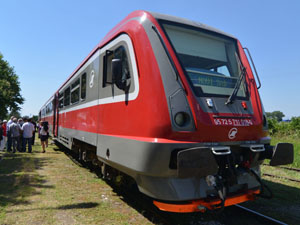 The Minister of Finance, Dusan Vujovic, is trying these days to get Serbia out of the agreement with Russia on the loan for financing Serbian Railways in the amount of USD 800 million, reports Blic.

This is the loan which was agreed with the Russian president, Vladimir Putin, back in 2008, when Boris Tadis was the president of Serbia. It was only activated when Aleksandar Vucic became the prime minister. The work on certain projects has already begun and 27 Russian diesel trains and locomotives have been purchased. So far, USD 300 million has been withdrawn, and USD 500 million remains.

The termination scenario is supposed to be actualized in the form of the request by the Serbian party to extend the loan realization deadline beyond December 2017, which the Russian party probably won't accept. The Blic source from the Ministry of Finance claims that the documents to be submitted to the Russian party have already been prepared.

Also, the Blic source from the Government says that Minister Vujovic believes that the Russian loan is not favorable to Serbia. To remind, the yearly interest rate of the Russian loan is 4.1% with a four-year grace period and a 10-year repayment period. Vujovic is convinced that the money could be found elsewhere under better conditions and is even prepared to go into arbitration with the Russians.

Another Blic source from the Ministry of Finance says that Minister Vujovic's entire team is working around the clock to come up with the way to terminate the contract with as few consequences as possible.

- There are indications of the intentions of certain financial institutions in Europe and the world to limit the influx of the Russian money to the Serbian infrastructural investments. There are rumors in the Ministry that, following the termination of the agreement with the Russians, a new agreement will be signed with EBRD or the World Bank. The question is how Serbia will fare at the arbitration – the Blic source stated.

Milan Kovacevic, a foreign investment consultant, said for Blic that he didn't know the reasons for the possible termination of a loan agreement with Russia regarding Serbian Railways, but that Russia might ask for a compensation.

The Ministry of Finance didn't wish to say directly whether the termination of the agreement with the Russians could be expected soon.

- As it is already familiar, the original loan availability period is until December 31, 2017. This is not a sufficient amount of time for the completion of the planning and construction work on the planned projects. We are currently negotiating about the necessary extension of the loan realization deadline – says the response by the Ministry of Finance.