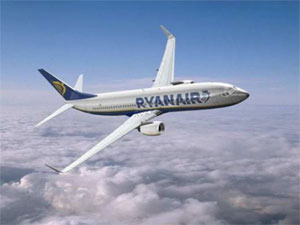 Airplanes of the low-cost airline company Ryanair will start flying from Nis to Düsseldorf on October 30 and to the Bergamo Airport in Milan on November 1. On both lines, airplanes will travel twice a week.

Airplanes of the Irish company will fly from the Nis airport to the German city on Thursdays and Sundays, whereas the flights to Italy are scheduled for Tuesdays and Saturdays.

- The new lines are ideal for both the business and the private customers, and we are also looking forward to opening additional lines in the future – said Chiara Ravara of Ryanair.

The tickets for the November flights will start selling on June 14 at the initial price of EUR 19.99 or RSD 2,466.

Ryanair entered the Serbian market a month ago by announcing flights from the Nis Constantine the Great Airport. The Irish airline company has already announced the flights to Berlin, starting September 4 and to Bratislava, starting October 31.

As David O’Brien of Ryanair said at the announcement of the flights to Bratislava in the beginning of May, the company has 84 bases in Europe, 113 million passangers a year, and its fleet consists of airplanes not older than 5 years in average. According to him, their ticket prices are 30% lower than in other low-cost companies.

It is already possible to travel from the Nis Airport to Malmö and Basel by the Wizz Air airplanes, and this Hungarian company will also open a Dortmund airline on August 20.