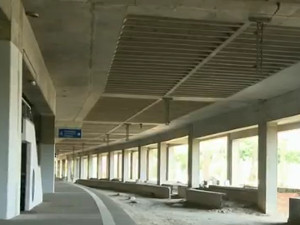 (Photo: YouTube/screenshot)
Even after more than two months since the ending of the legal tender which has seen eight offers, the contractor in charge of the access roads to the Prokop railway station has not yet been designated. Belgrade Land Development Public Agency, according to the invitation to tender data, was supposed to come at the decision as to who the contractor for the Belgrade railway station would be 25 days after the offers were made. It has been a month and a half since the ending of the tender.

Belgrade Land Development Public Agency asked the Public Procurement Office for the opinion regarding how to act further in choosing the contractor since foreign companies had also made offers, and also keeping in mind that in choosing, besides acting in accordance with the Public Procurement Law, other international agreements, regarding the involvement of foreign legal entities in local tenders, must be taken into consideration.

They did receive the answer, but they also asked for clarification.

- The public procurement procedure for contracting building roads with infrastructure and bridge constructions to access Prokop railway station saw eight offers, six of which were made by local companies and two of which were made by parties in which one of the members is not a resident of the Republic of Serbia. The committee for the passing of the procedure of public procurement concluded, after having considered the answer made by the Public Procurement Office, that an additional interpretation of article 86, paragraphs 10 and 11 of the Public Procurement Law was needed, seeing how the interpretation of these articles of the Law is crucial to making a decision regarding the ranking of the tenderers - explained the Agency.