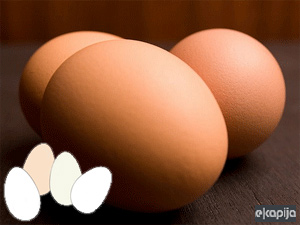 Serbia is the only country in the region that does not mark the eggs and which, due to non-compliance with veterinary regulations of the European Union, does not have a license for export of eggs in EU, "Politika" finds out. In particular, the country is criticized for not exercising control of salmonella according to EU standards.

An additional problem is that we are not allowed to transport eggs across the territory of member states (the same as with pork) so producers have inaccessible and some CEFTA countries with which it would be possible to arrange export.

The Veterinary Directorate confirmed this information for Belgrade newspaper,explaining that in Serbia " salmonella monitoring is done in accordance with national legislation." It is not enough if we want to export these products on the European market.

Asked our country does not mark eggs as in all other markets, which is the way to fight illegal traffic, at the ministry they vaguely reply that "currently, they are working on harmonization with EU regulations."