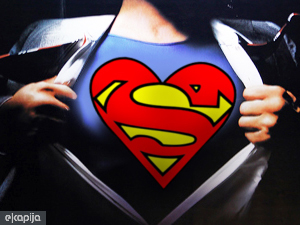 Cleveland city authorities intend to erect a monument to Superman to honor the two students from this Ohio city whose imagination gave birth to this popular superhero.
A steel sculpture four meters tall, which will be decorated with 'Kryptonite' crystals, is designed by U.S. sculptor David Demingon and will be installed on Lake Erie's shore. Cleveland has laid claim to the fictional character and decided to honor him because he was conceived by Jerry Siegel and Joe Shuster, who met as students at the local high school in 1933, while Shuster's wife, Joanne, also from this city, was the original model for Lois Lane, Superman's love interest. The monument, which will cost the city about USD 3 million, will be installed in 2017. This tribute, while unique, is not the first of its kind. Many cities have erected statues in honor of fictional characters. A two-ton statue of Rocky Balboa, the hero boxer of the eponymous film series, has stood by the Philadelphia Art Museum for more than two decades; Lewis Carroll’s White Rabbit, Mad Hatter and Alice have met atop a Wonderland toadstool in New York’s Central Park for more than 50 years; and London and Moscow have respectively honored Sherlock Holmes and the devil's assistants at locations from famous literary works.
Tags:
City of Cleveland
monument to Superman in Cleveland
Kryptonite
David Demingon
Lake Erie
Superman comic
Superman
Jerry Siegel
Joe Shuster
Joanne Shuster
Lois Lane
statue of Rocky Balboa
Rocky Balboa
Alice in Wonderland
Lewis Carroll
Sherlock Holmes
Arthur Connan Doyle
Share: