Serbia and Italy signed the Agreement on business cooperation 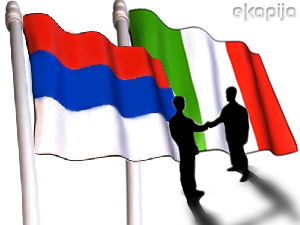 The representatives of Belgrade Chamber of Commerce and the Chamber of Italian and Serbian businessmen signed today the Agreement on business cooperation which will provide new business contacts, better opportunities for investments and improved external trade exchange.
The president of the Chamber of Italian and Serbian businessmen Claudio Cezare pointed out that Italy has been Serbia ‘s first external trade partner, indicating that Italy has a model of economic growth which is based on the development of small and middle enterprises, which should be applied in Serbia.
In his opinion, Serbian economy has a great potential to the develop sector for SME which should represent the ‘motor’ for the development of Serbian economy.
Serbian firms will also have greater opportunities for the placement in Italy, said Cezare.
Cezare emphasized that more than 650 Italian companies, mostly, in the finance and insurance sectors and in production industry, work in Serbia at the moment and that they employ 25.000 workers.
He also stressed that the external trade balance is on Serbia’s side, because our Government exported in the first five months of this year goods worth over 1 billion USD, while the import was 825 billion USD.
According to his opinion, ‘Fiat’ investment had a large influence on such result, but also did the investments in fashion sector.
Cezare stated that the Italian market would be interested in the placement of traditional and original products from Serbia, and the greatest potential is in food production sector.
The president of Belgrade Chamber of Commerce Milivoje Miletic pointed out that this agreement will give a new impuls for business cooperation of the two countries, primarily through new ways of work.
Miletic underlined that opportunities for business cooperation exist in all sectors.
He said that the export from Serbia to Italy was 2.5 billion USD last year, and that the import was 2.2 billion USD.
Companies:
Privredna komora Srbije
Komora italijansko-srpskih privrednika Beograd
Tags:
Belgrade Chamber of Commerce
PKB
Chamber of Italian and Serbian businessmen
Agreement on business cooperation between PKB i Italians
Klaudio Cezare
Claudio Cezare
MSP
sector MSP
Milivoje Miletić
Fiat
fijat
Share: