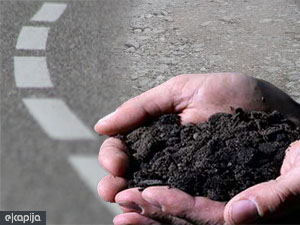 Ash will be used for construction of highways, railways and other infrastructure objects in the future, stated Secretary of State in the Ministry of Construction Dejan Trifunovic on Friday ( June 26 2015).

He underlined that we could build, for example, a 2000 km long highway from Belgrade to London just with the existing stocks of 200 tones of ash.

-It is unnatural for Serbia to build Corridor 11 between two power plants and not to use ash. We have been waiting for this for years and obviously there was not enough political will and knowledge in the past. By using ash we will solve problems of EPS , help road construction and contribute greatly to the protection of environment and ecology – said Trifunovic to the press at the round table on application of ash in the construction field at the Chamber of Commerce and Industry of Serbia.

It was emphasized at the meeting that by using ash from thermo-electric power plants and other thermo-energetic objects savings that can be achieved are from 30 to 80% in road construction in comparison with the use of standard construction materials – rock, sand, gravel and others .

Trifunovic said that the value of the current infrastructure projects is about five billion euros, including the construction of Belgrade – Budapest high-speed railway and that the Ministry of Construction, Transport and Infrastructure shall recommend the use of ash.

EPS has made a decision to provide free use of ash for public infrastructure projects. There are 200 billion tones of ash on landfills, and the market value of the ash is 1 billion euros. He added that the market value of one tone of ash is five euros.

He said that the Ministry has prepared clear standards for construction based on use of ash as well as he shall apply the practice of the other states which have been using ash in constructions for many decades, such as the USA and China.

PE ’Roads of Serbia’and the Ministry will built a trial section of road using ash on Corridor 11, and thermo-electric power plant ’Morava’ has planned to use ash for the construction of local traffic arteries.

Professor Branimir Ujdur, the former Assistant Minister of Capital Investments, says that the idea of using ash in construction existed ten yaers ago, but that from some reason was not realized .

This day should be remembered as a milestone of road industry, because the Ministry of Construction, Transport and Infrastructure has actualized this topic – said Ujdur.

He also said that ash represents a good material for road construction and that there e has been a problem because of lack of knowledge in technology of installment of fly ash, which must be previously stabilized in order to be used properly.

It was pointed out at the meeting at the Chamber of Commerce and Industry of Serbia that landfills of ash and clay cover about 1400 hectares of fertile land in Serbia, as well as that six million tones of fly ash , obtained by lignite combustion, is produced per year.

The Government of Serbia adopted Regulation on ash use in construction and road construction in Serbia, prepared by the Ministry of Construction, Transport and Infrastructure on Thursday and it shall come into effect on July 3.

Regulation defines conditions for ash use as a construction material , in detail , for Serbia aswel, due to the fact that such practice has existed for fifty years in the countries of the USA and the European Union.

Ash is used as a raw material for cement production, as an additive for concrete, in road construction, as an aggregate, in dam construction and supporting layers of driveway constructions, for land stabilization, for improvement of mechanical properties, and it can be also used in construction of undercarriage of railroads.