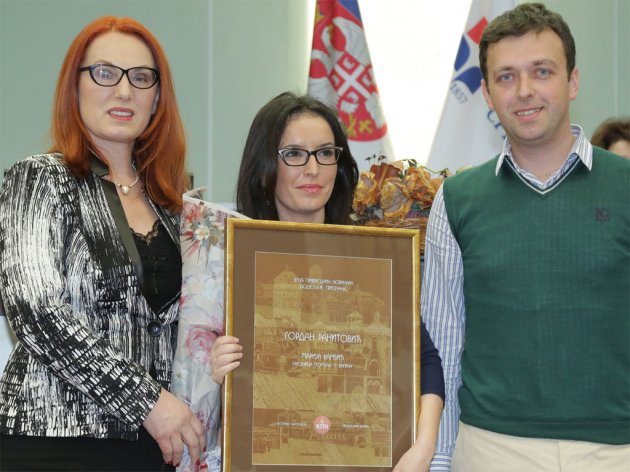 Natasa Ranitovic, the wife of late Gordan Ranitovic, eKapija's editor Marija Kambic, and Nenad Blagojevic, a journalist of Lisa magazine and last year's laureate (Photo: Mileta Mirčetić)
At traditional Businessman of the Year Awards ceremony that is organized by the Club of Business Journalists of Serbia, eKapija's Editor-in-Chief Marija Kambic won the Gordan Ranitovic Award for the year 2014 for investigative journalism.

Marija Kambic graduated from the Faculty of Political Sciences in Belgrade and has been engaged in business and economic journalism for as many as ten years now. With her interviews and specific themes, the editor-in-chief of eKapija is trying to motivate all businessmen to easier cope with all the challenges in business nowadays by promoting good business practices, quality managers, successful businessmen and interesting business ideas.

- I am extremely proud of the award I received today, especially because the jury is made of renowned business journalists. When colleagues recognize your work and present you with an award publicly, that is a great honor, but also a big obligation. With the help of young journalists on my team, we're managed to position eKapija as a leading business web portal in Serbia and the region. We are aware of this success, but we are also ready for new challenges and even better results - said Marija Kambic.

The Club of Business Journalists of Serbia presented the main award Businessman of the Year to Yumis President Milovan Kocic, whereas Tigar Tyres Serbia is declared as the Company of the Year.

Traditional awards to businessmen and companies that marked the previous year with their work were presented at a ceremony in the Serbian Chamber of Commerce.

The Project of the Year Award went to the thermal power station TE KO Kostolac to CEO Dragan Jovanovic, while the Business Move of the Year was the opening of Fresenius Medical Care factory in Vrsac.

Radojica Rovcanin, the director of Serbia and Montenegro Air Traffic Services SMATSA d.o.o., won the award for socially responsible operations, whereas Uzice-based Prvi Partizan received the award for the sustainability of domestic production. 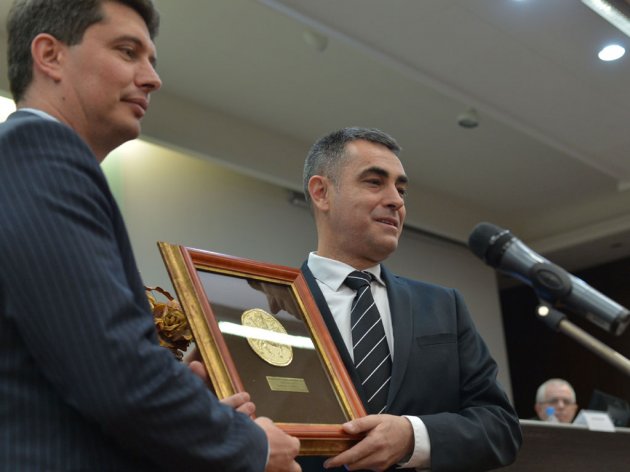 Young manager of the year is Dejan Dramicanin, the director of the IT group BITGER.

The same award went to Ljubisa Drinjakovic from the Bodri dairy company in Takovo for investment in the production of dairy products and Nermin Balija, the manager of the Cluster of Textile Companies of Novi Pazar ASSTEX, for the results achieved by this cluster.
Director of Cigota Special Hospital Dr. Zeljko Stakic won the award for 50 years of successful work of this health center and his contribution to the development of medical tourism, whereas a plaque for committment and 15-year dedication to charity work went to the humanitarian organization Stara Raska.

The Golden Pen Award, which is traditionally awarded for business journalism, was presented to Mirjana Stevanovic, a journalist of the daily newspaper Danas.