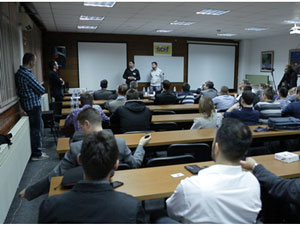 With over 75 individuals and 24 teams competing in the first IT start-up competition ever held in Nis, two teams from the Nis area and one from Belgrade won the competition and will be sent to Dubai early next year to work on their projects.

Organized by the developers of project Novi Nis, the US-based Clean Earth Capital invited the largest IT incubator/accelerator in the UAE to come to Nis and sponsor the competition to choose the best young start-up companies for an all-expenses paid stay in Dubai for three or four months to further develop their business models. Each team receives USD 30,000 and the objective of the event was to show the depth of IT talent in Nis, and the level of entrepreneurship in Nis and Serbia with the younger generation.

-We organized this event with Clean Earth Capital after a meeting in Dubai earlier this year between Philip Bay, me and our founder Kamal Hassan - the UAE-based Turn 8 CEO Mohammed Hamdy and representative of the sponsor of the event DP World said.

-We have organized scouting events like this throughout Asia, the former USSR, Northern Africa and Europe (Barcelona), and I must say that I was surprised to find such a large talent pool in Nis.

It was the first time that the UAE investment and IT company had considered looking at the Balkans. “We will for sure be back later next year in Nis to do another one,” said Mohammad Hamdy, who before running the Dubai-based IT investment accelerator, had a professional career in investment banking from Abu Dhabi where he was born.

Although the majority of teams came from Nis, other teams also came from Belgrade, Kragujevac, Novi Sad, Skopje, Sofia, Tuzla and Sarajevo.

-Our goal was to have 10-14 teams competing from Nis, and we really did not expect to get the response we got from the other cities we targeted with our partners, Philip Bay, CEO of Clean Earth Capital and the developer of the Novi Nis project said.

-We ended up with 23 teams and frankly-speaking, a very high level of competition that greatly exceeded our expectations for this first event - Bay said.

Co-organized together with NI-Cat, a local tech cluster led by Goran Mladenovic, and the Electronics Faculty in Nis, the event known as “Innov-a-thon” was a competitive venue for young people to show their entrepreneurial strengths and ideas.

Four independent jurors were on the selection panel, Mohammed Hamdy from Turn 8; Dragan Domazet, the founder and dean of Metropolitan University in Belgrade and Nis; Dragan Jankovic, dean of the Electronics Faculty in Nis; and Richard Danicic, an independent financial advisor working for a USAID contractor.

At the end of the day, three teams were chosen to continue their work in the UAE. Hypercube from Nis and their team, Filip Jovanović, Lazar Djordjevic, Djordje Krutil and Srecko Janicijevic, have developed a mobile app that is about a distributed solution for the optimization of the time spent in line– and all are graduates from ELFAK in Nis. The other winner was a gamer team from Nis known as “GG”, led by Zorana Lazarevic and Konstantin Velickovic with a concept called the Good Game network that allows for more play with more gamers on an international level. The third winner was from Belgrade and their concept idea is called “Beaconed”; a dating app that uses low-energy blue tooth connections. The founders of this app-in-progress are Jovana Miljanovic , leader of the largest Serbian travel blog and Vukasin Vukoje , IT student from Belgrade.

-Nis is well on its way to becoming a center of excellence in IT and ICT because of this event, and we look forward to having more of these in the future,” Goran Mladenovic of the Ni-Cat Technology cluster based in Nis said.