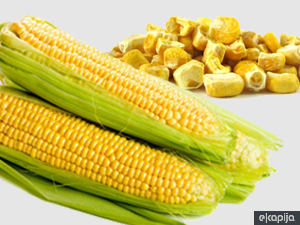 Half of this year’s record maize yield will go to foreign buyers. The price is RSD 13 and Maize will again be the most important and the first-ranked at the list of agriculture and food products Serbia exports.

Weather terms served us well so farmers harvested maize, dried it and placed it into silos. The ones who needed money immediately have already found buyers.

This time last year, a kilogram of maize totaled RSD 16,5. For good harvest and big offer, it is three dinars cheaper now. Djordje Milicevic from Curug says he is waiting for better price because this one “cannot cover everything”.

Exporters are managing not only to cover expenses but to earn as well. They already have buyers and they sell a ton of maize for 130 euros.

- Maize is mainly transported through the Constanta port where overloading to big ships is carried out. Final destinations are the countries of north Africa, Italy, Spain, and lately end in South Korea and Japan - Dejan Sorajic from Novi Sad-based Anova says.

- We can expect total export of maize of over three million tons. Some calculations show it might be three and a half million tons which would for the financial effect result in profit of over USD 500 m, which would be one of the best results lately- Zarko Galetin from the Product stock market in Novi Sad says.

abroad. It is estimated that this month, mostly, they will sell the same quantity via the Danube.