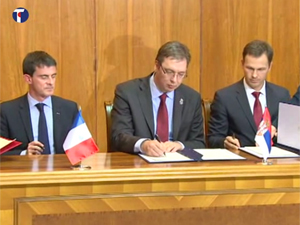 On November 6, the prime ministers of Serbia and France, Aleksandar Vucicand Manuel Vals and the mayor of the Belgrade Sinisa Mali signed a Memorandum of understanding on constructionof metro and five agreements more.

Vice president of the Government and the minister for construction, traffic and infrastructure, Zorana Mihajlovic, president of Vinci airports and GM of "Nikola Tesla" Sasa Vlaisavljevic, signed the Memorandum of understanding and development of international airports in Serbia.

The Minister for labor, employment, war and social issues, Aleksandar Vulin and the ambassador of France in Belgrade Christine Moro, signed the Agreement between the governments on social security.

Minister Mihajlovic and the ambassador Moro signed the Agreement in the traffic and infrastructure field and the minister of trade, Zeljko Sertic and GM of French Agency for technical support, signed the agreement on technical cooperation in PPP field.