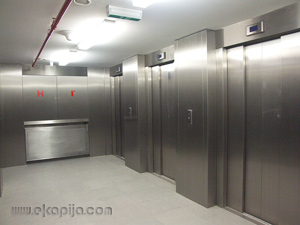 On Friday, October 31, 2014, representatives of German company ThyssenKrupp expressed their wish to expand their business in Serbia through cooperation with assembling companies, spare parts suppliers and elevator servicers from Serbia.

The company head, Hans Zaherer, said at the Serbian Chamber of Commerce that they already have two companies in our country, one operating in elevators and with an annual turnover of three million euros and the other one dealing with steel and generating turnover of four million euros.

As he said, those companies are too small to survive and too big to shut down and Thyssen now sees an opportunity to participate in the Belgrade on water project in cooperation with companies suppliers from Serbia and there are some ideas on initiating elevators production in Serbia.

ThyssenKrupp is a big world company with companies worldwide and generates an annual turover of EUR 14 billion with 160.000 people. It generates turnover of six billion euros only in the elevator production and hires 50.000 people.

The secratry of the SCC Association for metal, electrical, industry metal mines and metallurgy, Ljubisa Obradovic, said that Serbia has excellent companies operating in elevator components, that it has assembling and service staff in the maintenance, adding that there is a lot of work in our country in the existing elevators reconstruction.

Serbia has 20.000 elevators, 30-40 years old on the average and they need an overhaul but today in the country there are no strong elevator producers and therefore they need a strategic partner.

It was outline that David Pajic Daka, which did it in a very quality manner did it and therefore they can function for that long. The company head, Nenad Sarenac,reminded the company went private seven years ago and today it produces cabins and frames for new elevators.

Last year, it also modernized 60 elevators in Belgrade and installed 35 new ones, Sarenac said, adding that they are very interested in cooperation.

The owner of Sigma lift, Milivoje Nikolic, reminded that David Pajic where he used to work, installed the first elevator in Belgrade in Agrobanka.

Representatives of other companies in Serbia which are very interested in setting up business cooperation with Thyssen", as well as vice president at SCC, Marko Cadez, who is also the head of the SCC branch office in Germany attended the meeting as well.