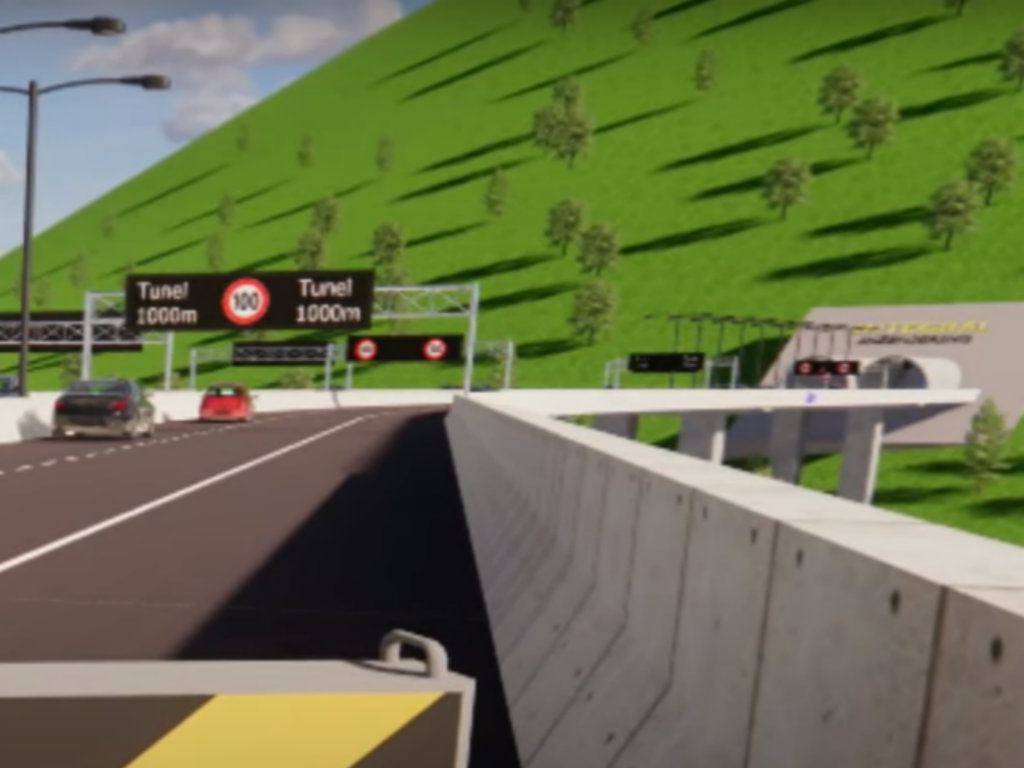 Computer rendering of the future highway south of Pozega (Photo: YouTube/screenshot)
A commercial agreement on the preparation of the technical documentation and the construction of the highway from Pozega to Duga Poljana, in the length of 75 kilometers, was signed recently with the Chinese company CRBC. This is the continuation of the project of the construction of the Belgrade-South Adriatic highway. Upon the completion of this section, the next step is to build a route to Boljare and the border with Montenegro.

The president of Serbia, Aleksandar Vucic, stated on that occasion that the construction of the section to Duga Poljana, the place at the mid-point between Novi Pazar and Sjenica, would begin as soon as March and that it would take two years to complete. The section is very difficult to build: of the 75 kilometers, more than two thirds consist of tunnels and bridges. The president optimistically announced a travel time of two hours on the Belgrade-Sjenica route.

Said agreement was signed by the minister of construction, transport and infrastructure of Serbia, Tomislav Momirovic, the director of the PE Roads of Serbia, Zoran Drobnjak, and the vice-president of CRBC, and the ambassador of China to Serbia, Chen Bo, attended as well.

Vucic announced a cost price of no less than EUR 1.5 billion. The sections slated last for construction, from Duga Poljana to Boljare, is easier to build.

The president also said that the Preljina-Pakovrace highway section (the de facto bypass route around Cacak) “is finished, but we are waiting for an agreement between the Roads of Serbia and the competent ministry regarding its opening”. The essence of the problem, according to Vucic, is whether the flanks are to be made of stone or not, so the opening of that subsection on the route to Pozega, under the most pessimistic projections, could wait until February 10, although it was previously announced for last weekend. In a more optimistic scenario, it could open in “around ten days”, that is, by Orthodox Christmas.

Log in to view complete information:
Forgot your password? Click here HERE
For free test use, click HERE
Latest
Most read
Serbia to Get Quotas for 2023 for Export of Cheese, Alcoholic Beverages and Cigarettes to EAEC 27.06.2022.
New Energy Scout Generation Selection 27.06.2022.
Rebuilt Border Crossing Kotroman Between Serbia and BiH Opened 27.06.2022.
The Gadget That Will Make Your Summer Better – A Perfect SSD for Fans of Travel 27.06.2022.
Reconstruction of Rajko Mitic Stadium to Cost Around EUR 65 Million – Club’s Annual Income to Be EUR 50 Million, Terzic Announces 26.06.2022.
Ecological Construction Principles on Cigota – Eco Settlement 360 Offers Modern Mountain Houses at Altitude of Over 1,300 Meters (PHOTO) 27.06.2022.
MK Group is Constructing its Fourth Wind Farm and the First Agro-Solar Project in the Region 03.06.2022.
Rebuilt Border Crossing Kotroman Between Serbia and BiH Opened 27.06.2022.
Weather
Weather forecast